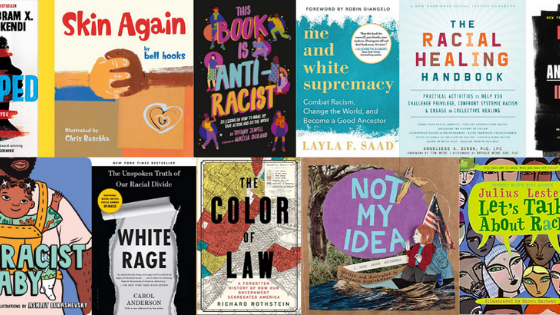 “The term 'antiracist' refers to people who are actively seeking not only to raise their consciousness about race and racism, but also to take action when they see racial power inequities in everyday life. Being an antiracist is much different from just being 'nonracist,' as Black antiracist Marlon James made clear. Being a nonracist means you can have beliefs against racism, but when it comes to events like the murders of Black men by police, 'you can watch things at home unfolding on TV, but not do a thing about it.' According to James, being an antiracist means that you are developing a different moral code, one that pairs a commitment to not being racist (whether verbalized or not) with action to protest and end the racist things you see in the world. I would add that saying you aren’t a racist isn’t enough to start healing from racism. You need the intentional mindset of 'Yep, this racism thing is everyone’s problem—including mine, and I’m going to do something about it."

This list of books is meant to be helpful for those who want to begin the hard work of moving from nonracist to antiracism. The first books on the list are for adults and older readers, while the end of the list highlights books for kids.

**Please note that many titles are backordered due to high demand across the country, and may take a few weeks to come in. We appreciate your patience and support.

How to Be an Antiracist (Hardcover)

“A boldly articulated, historically informed explanation of what exactly racist ideas and thinking are . . . [Kendi’s] prose is thoughtful, sincere, and polished. This powerful book will spark many conversations.”—Publishers Weekly (starred review)

Me and White Supremacy: Combat Racism, Change the World, and Become a Good Ancestor (Hardcover)

An indispensable resource for white people who want to challenge white supremacy but don't know where to begin. She moves her readers from their heads into their hearts, and ultimately, into their practice.

Stamped from the Beginning: The Definitive History of Racist Ideas in America (Paperback)

Uses the life stories of five major American intellectuals to offer a window into the contentious debates between assimilationists and segregationists and between racists and antiracists. From Puritan minister Cotton Mather to Thomas Jefferson, from fiery abolitionist William Lloyd Garrison to brilliant scholar W.E.B. Du Bois to legendary anti-prison activist Angela Davis, Kendi shows how and why some of our leading proslavery and pro-civil rights thinkers have challenged or helped cement racist ideas in America.

Stamped: Racism, Antiracism, and You: A Remix of the National Book Award-winning Stamped from the Beginning (Hardcover)

I don’t know who thought of having Jason Reynolds and Ibram X Kendie collaborate on a young people’s edition of Stamped from the Beginning, but it was genius! Reynolds presents the facts from the adult version in a way that is accessible and interesting for younger adults (or for older adults who feel intimidated by the more intense book.) He cogently explains how western culture in general, and United States culture in particular had racism baked in from the very earliest days. There aren’t many books that change your life, but this one has the power to do so.

White Rage: The Unspoken Truth of Our Racial Divide (Paperback)

As Ann Patchett says, "Truly, I couldn't put it down. [White Rage] draws a razor-sharp line from the Civil War to Trayvon Martin with all the stops in between. If you want context for . . . the life we're living in this country right this minute, I urge you to pick up a copy. [Its] 160 pages have the power to change your life."

So You Want to Talk About Race (Paperback)

White Fragility: Why It's So Hard for White People to Talk About Racism (Paperback)

It isn’t often that you read a book that changes your entire perspective on the world. This book did that for me. Written by a white woman for white people who want to do the hard work of looking at themselves to make things better now.
If you have ever said (or thought) I can’t be racist because:

A People's History of the United States (Paperback)

The Color of Law: A Forgotten History of How Our Government Segregated America (Paperback)

Debunking the thought train of de facto segregation in the 20th century and today, Richard Rothstein gives a comprehensive yet readable list of precisely the legislative, de jure, acts of government which segregated America and continue to do so today. Rothstein reminds us not to forget the incredible and very real history of written legal racism in this country and the dangers that come with ignoring our judicial and legislative mistakes. Must read if you haven't already been assigned it.

Evicted: Poverty and Profit in the American City (Paperback)

Why Are All the Black Kids Sitting Together in the Cafeteria?: And Other Conversations About Race (Paperback)

Hood Feminism: Notes from the Women That a Movement Forgot (Hardcover)

What Doesn't Kill You Makes You Blacker: A Memoir in Essays (Paperback)

When They Call You a Terrorist: A Black Lives Matter Memoir (Paperback)

I'm Still Here: Black Dignity in a World Made for Whiteness (Hardcover)

This Book Is Anti-Racist: 20 Lessons on How to Wake Up, Take Action, and Do The Work (Empower the Future #1) (Paperback)

"This book is written for the young person who doesn't know how to speak up to the racist adults in their life. For the 14-year-old who sees injustice at school and isn't able to understand the role racism plays in separating them from their friends. For the kid who spends years trying to fit into the dominant culture and loses themselves for a little while. It's for all of the Black and Brown children who have been harmed (physically and emotionally) because no one stood up for them or they couldn't stand up for themselves; because the colour of their skin, the texture of their hair, their names made white folx feel scared and threatened. It is written so children and young adults will feel empowered to stand up to the adults who continue to close doors in their faces. This book will give them the language and ability to understand racism and a drive to undo it. In short, it is for everyone."

Not My Idea: A Book about Whiteness (Ordinary Terrible Things) (Hardcover)

A young white girl, with the help of her mother, struggles to understand the whys and hows of racism and white supremacy and its long history in the United States, as well as the efforts to combat it.

Something Happened in Our Town: A Child's Story about Racial Injustice (Hardcover)

After discussing the police shooting of a local black man with their families, Emma and Josh know how to treat a new student who looks and speaks differently than his classmates.

Antiracist Baby Board Book (Board book)

A fresh new board book that empowers parents and children to uproot racism in our society and in ourselves.

"This wonderful book should be a first choice for all collections and is strongly recommended as a springboard for discussions about differences.” —School Library Journal (starred review)

Celebrating all that makes each person unique and different, this award-winning book, with its myriad of faces, offers new ways to talk about race and identity and introduces a strong message of loving oneself and others sure to appeal to parents of the youngest readers.

We Rise, We Resist, We Raise Our Voices (Paperback)

What do we tell our children when the world seems bleak, and prejudice and racism run rampant? With 96 lavishly designed pages of original art and prose, fifty diverse creators lend voice to young activists.