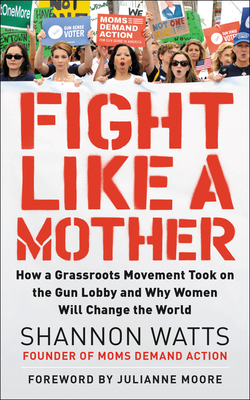 Shannon Watts was a stay-at-home mom folding laundry when news of the tragic shooting at Sandy Hook Elementary flashed across the television screen. In one moment, she went from outraged to engaged and decided to do something about it. What started as a simple Facebook group to connect with other frustrated parents grew into Moms Demand Action, a national movement with millions of supporters and a powerful grassroots network of local chapters in all 50 states. Shannon has been called "the NRA’s worst nightmare”—and her army of moms have bravely gone up against the gun lobby, showing up in their signature red shirts, blocking the hallways of congress with their strollers, electing gun sense candidates and running for office themselves, proving that if the 80 million moms in this country come together, they can put an end to gun violence.

Fight Like a Mother is the incredible account how one mother’s cry for change became the driving force behind gun safety progress. Along with stories of perseverance, courage, and compassion, Watts shines a light on the unique power of women—starting with what they have, leading with their maternal strengths, and doubling down instead of backing down. While not everyone can be on the front lines lobbying congress, every mom is already a multi-tasking organizer, and Shannon explains how to go from amateur activist to having a real impact in your community and beyond. Fight Like a Mother will inspire everyone—mothers and fathers, students and teachers, lawmakers, and anyone motivated to enact change—to get to work transforming hearts and minds, and passing laws that save lives.

SHANNON WATTS is the founder of Mom's Demand Action for Gun Sense in America—the leading force for gun violence prevention, with chapters in all 50 states and a powerful grassroots network of moms that has successfully effected change at the local, state and national level. In 2013, MDA partnered with Mayors Against Illegal Guns to form Everytown for Gun Safety, nationwide movement of millions of Americans working together to end the epidemic of gun violence. She is an active board member of Emerge America and Rise to Run, two of the nation's leading organizations for recruiting and training women to run for office. Watts is a contributor to The Huffington Post, and Medium. Her writing has appeared in Vogue , Time , The Washington Post , and others. She is a mother of five.

“Too many mothers have been tragically impacted by gun violence, and yet they courageously turn their grief and frustration into action. I’m honored to fight alongside them, and I’m so glad Shannon Watts has written this book and provided a road map for other everyday activists to make a difference.” — Speaker Nancy Pelosi

“There’s never been more energy behind America’s gun safety movement than there is today, and Shannon Watts and Moms Demand Action are a big reason why. Shannon is fearless, and her story shows that change – even on the toughest issues – really is possible.” — Michael Bloomberg

“Fight Like A Mother is practical and personal; not only equipping you with the necessary and nitty-gritty tools to start a movement, but also the fearless mentality to do it now.” — Preet Bharara, former U.S. Attorney, host of the “Stay Tuned with Preet” podcast

“There is nothing more powerful than a mother on a mission—and Shannon perfectly explains why. This mother has fought to lay the groundwork for one of America’s largest movements for gun violence prevention.” — Congresswoman Lucy McBath (GA-06)

“Shannon Watts is one of my personal heroes, a true activist for our time. After Sandy Hook, she channeled her despair and fury into action. Fight Like a Mother will inspire you to take an issue on and ultimately, change the world.” — Katie Couric

&#8220A page-turner, overflowing with moving stories as well as practical advice…. Shannon’s courage and down-to-earth approach radiate from every page, and the theme of finding her ‘soul sisters’ in her fight is as powerful as it is universal.” — Cecile Richards

“There is nothing more powerful and terrifying than a momma bear protecting her cubs. This book is a guidebook to all who are looking to drive real and lasting change in their communities.” — Congresswoman Robin L. Kelly (IL-02)

“It’s encouraging to see someone tell the story that, sadly, has unfolded over and over again in this country. This book has the potential to make change so we can see a better tomorrow.” — Soledad O’Brien

“The world needs angry women right now. It’s time we embrace the passion and action behind saying ‘enough is enough.’ Fight Like a Mother is a testament to the positive power of women’s anger and using it as an unstoppable force for change.” — Soraya Chemaly, writer, activist, and bestselling author of Rage Becomes Her

“Shannon Watts’ fight is for her kids and all our kids. Shannon stewards this rocket ship of hope for those of us distraught by the epidemic of gun violence in our country. A great read!” — Chelsea Clinton

“Shannon is an inspiration to every mom fighting to build a better, safer country for our kids. Her story reminds us that, together, we can be a powerful force for change – and that you should never underestimate a mom’s ability to get things done.” — Governor Gina M. Raimondo, Rhode Island

“Shannon Watts is proof that activism and community can actually change laws and lives. Fight Like a Mother is a brilliant call-to-action for anyone hoping to get off the sidelines and create meaningful and lasting impact.”   — Sophia Bush

“Fight Like a Mother illuminates how the very skills that we use daily as mothers are the exact skills necessary to take down the NRA. Shannon is my personal hero. Read this book and she will be yours as well.” — Debra Messing

“Never underestimate a woman on a mission. Fight Like a Mother shows the unstoppable power of women working together and offers inspiration for anyone who wants to join the fight to roll up their sleeves and get to work.” — Olivia Munn