The Gimmicks: A Novel (Hardcover) 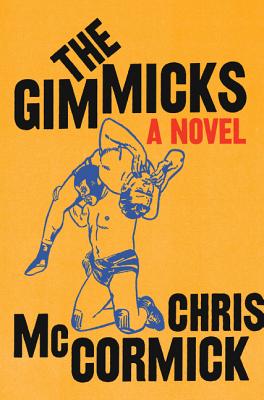 The Gimmicks: A Novel (Hardcover)

This novel pulled me in so, so wholeheartedly. The Gimmicks is a weaving: of history, of Armenian and American cultures, of perspectives, of messy, imperfect characters whom I grew to love. The impact of the past plays largely into the lives of these characters, the ways in which history is carried in their memories and colors their choices. Told in alternating perspectives, this novel is also very much about the imprints that characters leave on each other, a deeply meaningful exploration of the ways in which the lives of human beings are intertwined. With beautiful writing and engaging storytelling, The Gimmicks is not to be missed.

Chris McCormick’s The Gimmicks, is a history lesson, a testament to brotherhood, an inquiry into radicalized minds and culture, a tracking of the Armenian diaspora, a love story, and a drive-by past the world of professional wrestling. McCormick takes a triad of people; Ruben, a young intellect radically fixated on the Armenian genocide, Avo, Ruben’s brother and complement/foil, and Mina, a remarkably lucky and skilled backgammon player and Ruben’s rival.  How many different configurations can three people take on in each others’ lives? McCormick lovingly, skillfully, shows us; tracking them from Armenia to Europe to America, while they all grapple with the permanence of their actions on themselves and each other. McCormick is dizzyingly smart too, exploring concepts of love and devotion through the language of violence and wrestling that you will feel, viscerally. Messy and exquisite, The Gimmicks is a force.

“The Gimmicks is a gorgeous epic that astounds with its scope and beauty. With empathy and humor, McCormick unravels the ties between brotherhood and betrayal, love and abandonment, and the fictions we create to live with the pain of the past. This novel will blow you away.” —Brit Bennett, New York Times bestselling author of The Mothers

Set in the waning years of the Cold War, a stunning debut novel about a trio of young Armenians that moves from the Soviet Union, across Europe, to Southern California, and at its center, one of the most tragic cataclysms in twentieth-century history—the Armenian Genocide—whose traumatic reverberations will have unexpected consequences on all three lives.

This exuberant, wholly original novel begins in Kirovakan, Armenia, in 1971. Ruben Petrosian is a serious, solitary young man who cares about two things: mastering the game of backgammon to beat his archrival, Mina, and studying the history of his ancestors. Ruben grieves the victims of the 1915 Armenian Genocide, a crime still denied by the descendants of its perpetrators, and dreams of vengeance.

When his orphaned cousin, Avo, comes to live with his family, Ruben’s life is transformed. Gregarious and physically enormous, with a distinct unibrow that becomes his signature, Avo is instantly beloved. He is everything Ruben is not, yet the two form a bond they swear never to break.

But their paths diverge when Ruben vanishes—drafted into an extremist group that will stop at nothing to make Turkey acknowledge the genocide. Unmoored by Ruben’s disappearance, Avo and Mina grow close in his absence. But fate brings the cousins together once more, when Ruben secretly contacts Avo, convincing him to leave Mina and join the extremists—a choice that will dramatically alter the course of their lives.

Left to unravel the threads of this story is Terry “Angel Hair” Krill, a veteran of both the US Navy and the funhouse world of professional wrestling, whose life intersects with Avo, Ruben, and Mina’s in surprising and devastating ways.

Told through alternating perspectives, The Gimmicks is a masterpiece of storytelling. Chris McCormick brilliantly illuminates the impact of history and injustice on ordinary lives and challenges us to confront the spectacle of violence and the specter of its aftermath.

Chris McCormick is also the author of Desert Boys, a collection of stories, which won the Stonewall Book Award. Born in 1987 and raised on the California side of the Mojave Desert, he is a graduate of the University of Michigan’s MFA program who lives and teaches in Minnesota.

“The Gimmicks is a gorgeous epic that astounds with its scope and beauty. With empathy and humor, McCormick unravels the ties between brotherhood and betrayal, love and abandonment, and the fictions we create to live with the pain of the past. This novel will blow you away.” — Brit Bennett, New York Times bestselling author of The Mothers.

“Chris McCormick's The Gimmicks knocked me back and then knocked me over. A fascinating and bold debut novel that more than answers the promise of his terrific first collection of stories, Desert Boys. A wide-ranging, globe — Peter Orner, author of Maggie Brown & Others

“Chris McCormick is a novelist of uncommon vision, empathy, and purpose. The Gimmicks crosses continents and decades to tell a remarkable story of historical trauma, friendship, and the moral combat of professional wrestling. Though haunted by ghosts, The Gimmicks is brilliantly, boisterously alive." — Anthony Marra, author of NBCC John Leonard Prize-winning, New York Times bestselling A Constellation of Vital Phenomena

“[The Gimmicks’s] subcultures, emphasized in the book’s eye-catching cover design and promotional copy, are not what fuel it. It’s really about history — personal and collective — and it’s rooted in horrors from more than a century ago that are still making news today… At a time when plot and contrivance in literary fiction are not the most fashionable things, McCormick, in his early 30s, proves adept at old-fashioned skills that one hopes will never go entirely unpracticed.” — New York Times

“This brilliant, kooky book touches on everything from the Armenian genocide and the arcane rules of backgammon to the spandexed underworld of semiprofessional wrestling in 1980s Los Angeles…Hardly a page will go by that you won’t marvel at McCormick’s tender, surreally comic study of two brothers…It’s all stranger than fiction, and too fantastic not to wish it were true.” — Entertainment Weekly

"McCormick explores the plight of Armenian refugees who arrive in America with their bodies as their only commodity and how a national trauma shapes Armenian identity. Masterfully structured and stupendously ambitious, this sweeping historical epic bears comparison to Michael Chabon’s The Amazing Adventures of Kavalier and Clay (2000). Always moving, brilliantly realized, and full of wondrous humor, this is a debut of rare depth and brilliance." — Booklist (starred review)

"A fluid, beautifully written story about professional wrestling, intergenerational trauma, genocide, and history, jumping through Armenia to America and from one generation to another." — The Millions