Running Is a Kind of Dreaming: A Memoir (Hardcover) 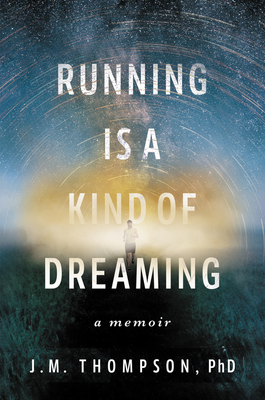 Running Is a Kind of Dreaming: A Memoir (Hardcover)

Left, right. Left, right. Facing addiction, depression, and trauma, J.M. Thompson was ready to give up. Then, he discovered the sport of ultramarathons. There's a masochism inherent in running 200 miles in one race. (That's more than the distance between Cleveland, OH, and Buffalo, NY.) But in pushing yourself to your absolute limits, life becomes precious, beautiful, and fulfilling.

A powerful, breathtaking memoir about a young man's descent into madness, and how running saved his life.

“Voluntary or involuntary?” asked the nurse who admitted J. M. Thompson to a San Francisco psychiatric hospital in January 2005. Following years of depression, ineffective medication, and therapy that went nowhere, Thompson feared he was falling into an inescapable darkness. He decided that death was his only exit route from the torture of his mind. After a suicide attempt, he spent weeks confined on the psych ward, feeling scared, alone, and trapped. One afternoon during an exercise break he experienced a sudden urge. “Run, I thought. Run before it’s too late and you’re stuck down there. Right now. Run. ”

The impulse that starts with sprints across a hospital rooftop turns into all night runs in the mountains. Through motion and immersion in the beauty of nature, Thompson finds a way out of the hell of depression and drug addiction. Step by step, mile by mile, his body and mind heal. In this lyrical, vulnerable, and breathtaking memoir, J. M. Thompson, now a successful psychologist, retraces the path that led him from despair to wellness, detailing the chilling childhood trauma that caused his depression, and the unorthodox treatment that saved him. Running Is a Kind of Dreaming is a luminous literary testament to the universal human capacity to recover from our deepest wounds.

J. M. Thompson, PhD,  is a clinical psychologist and ultrarunner. He completed his psychology training at the University of California, San Francisco, where he conducted research on the brain mechanisms of meditation and the physiology of trauma.  He is also an ordained Zen practitioner and certified yoga teacher.  He has finished over 40 ultramarathons, and multiple solo adventure runs in the Sierra Nevada, the Grand Canyon, and Death Valley. Thompson currently serves as a staff psychologist at the United States Department of Veterans Affairs. He lives in San Francisco with his wife and two children. Website: www.runningisakindofdreaming.com

“J. M. Thompson’s beautifully written Running Is a Kind of Dreaming is a revelation. This remarkable memoir takes the reader on a journey from the abyss—the darkest despair, when all seems lost—to the return to glorious life. This book will inspire and provide hope for the hopeless.”  — DAVID SHEFF, author of the New York Times bestseller Beautiful Boy

“This is a beautiful, powerful book with multiple dimensions of exploration and discovery. The painful and joyful moments of the author’s life are skillfully interwoven with the mind-wandering trances of long distance running. With a mastery of psychology and philosophy, along with his rich and varied life, Thompson’s reflections on childhood, family, mental illness, healing and meaning will enrich and challenge any reader. While highly recommended for all, this book will be especially useful for anyone who works in the mental health world or struggles with mental health challenges personally or in their family. This is a reflective, hopeful book.”  — BRUCE PERRY, co-author (with Oprah Winfrey) of the #1 New York Times bestseller What Happened to You

"J. M. Thompson's journey through the depths of suicidal depression and addiction is terrifying, arduous, and ultimately exhilarating. Running is a Kind of Dreaming delivers a fascinating exploration of the relation between mind and body, as well as inspiration for those struggling to find light beyond the darkness. A brave and vivid story, poetically told." — SCOTT STOSSEL, author of the New York Times bestseller My Age of Anxiety

"[Thompson] eloquently captures the beauty of communing with nature in details runners will soak up . . . Running is a Kind of Dreaming is a hopeful story of resilience by a man baring his vulnerability as a trauma survivor and who fought his demons." — BRENDA BARRERA, Booklist

“Thompson eloquently captures the beauty of communing with nature in details runners will soak up . . . Running is a Kind of Dreaming is a hopeful story of resilience by a man baring his vulnerability as a trauma survivor and who fought his demons.” — Booklist