Summer Light, and Then Comes the Night: A Novel (Hardcover) 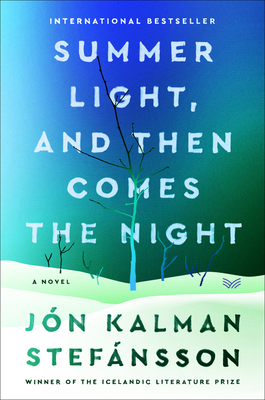 Summer Light, and Then Comes the Night: A Novel (Hardcover)

SUMMER LIGHT AND THEN COMES THE NIGHT is a profound and playful masterwork from one of Iceland’s most beloved authors that explores the dreams and desires of ordinary people in a rural town.

In a village of only four hundred inhabitants, life could seem unremarkable. Yet in this remote town, a new road to the city has change on everyone’s minds.

There is the beautiful, elusive Elisabet who cuts a surprisingly svelte path at The Knitting Company. Neighbors Kristin and Kjartan who seem…normal, but for their explosive passion that bewilders even themselves (and ignites the spectacular revenge of Kjartan’s wife). And then the most successful businessman in town decides to ditch his Range Rover and glamorous wife in exchange for Latin books and stargazing.

Unexpected, warm, and humorous, Stefansson explores the dreams and desires of these everyday people, and reveals the magic of life in all of its progress, its complacency, its ugliness and, ultimately, beauty.

AN INTERNATIONAL BESTSELLER AND WINNER OF THE ICELANDIC LITERATURE PRIZE

Jón Kalman Stefánsson’s novels have been nominated three times for the Nordic Council Prize for Literature and his novel Summer Light, and then Comes the Night received the Icelandic Prize for Literature in 2005. In 2011 he was awarded the prestigious P. O. Enquist Award. His books includeHeaven and Hell; The Sorrow of Angels, longlisted for the Independent Foreign Fiction Prize; The Heart of Man, winner of the Oxford-Weidenfeld Translation Prize; and Fish Have No Feet, which was longlisted for the Man Booker International Prize. He lives in Reykjavík, Iceland.

"Stefánsson's immersive prose swells, thunders and sparkles with all the shifting moods of the of the sea on an Icelandic summer’s day.”
— The Independent (UK)

"The Icelandic Dickens...He has the same gift of writing with great understanding, an empathy with troubled souls and a skill at laugh-out-loud comedy."
— Irish Examiner

"Jón Kalman Stefánsson's lyrical style has earned him a dedicated following of readers in Iceland. [In] Summer Light and Then Comes the Night each standalone story describes life in a small village in West Iceland, normal people—their insecurities and anxieties, their courage and loneliness. Together, these episodes create one, coherent whole; there’s no set narrator, but rather, it’s the village that tells these stories of hope, cruelty, life, and death."
— Literary Hub

"Stefánsson is a superb storyteller with a metaphysical bent. He draws characters with empathy and wit, and frames their condition in existential dichotomies: modernity versus the past, mystical versus rational, destiny versus coincidence."
— Booklist

"Stefánsson's prose rolls and surges with oceanic splendor."
— The Spectator

"An immersive and funny portrait of a community whose members squabble and celebrate in equal measure."
— Publishers Weekly

"Wistful and whimsical....[Stefánsson's] writing is fertile, yielding extraordinary imagery. There are many tears in these stories and in this village, but there is also hope, because even unfulfilled dreams offer guidance, 'they evaporate and settle like dew in the sky, where they transform into the stars in the night.'"
— Minneapolis Star Tribune