The New Map: Energy, Climate, and the Clash of Nations (Paperback) 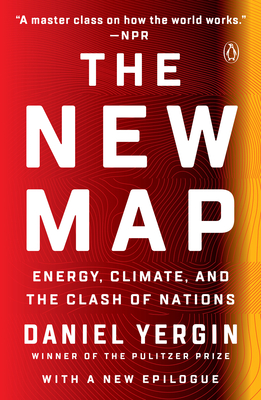 The New Map: Energy, Climate, and the Clash of Nations (Paperback)

“A master class on how the world works.” —NPR

The world is being shaken by the collision of energy, climate change, and the clashing power of nations in a time of global crisis. Out of this tumult is emerging a new map of energy and geopolitics. The “shale revolution” in oil and gas has transformed the American economy, ending the “era of shortage” but introducing a turbulent new era. Almost overnight, the United States has become the world's number one energy powerhouse. Yet concern about energy's role in climate change is challenging the global economy and way of life, accelerating a second energy revolution in the search for a low-carbon future. All of this has been made starker and more urgent by the coronavirus pandemic and the economic dark age that it has wrought.

World politics is being upended, as a new cold war develops between the United States and China, and the rivalry grows more dangerous with Russia, which is pivoting east toward Beijing. Vladimir Putin and China's Xi Jinping are converging both on energy and on challenging American leadership, as China projects its power and influence in all directions. The South China Sea, claimed by China and the world's most critical trade route, could become the arena where the United States and China directly collide. The map of the Middle East, which was laid down after World War I, is being challenged by jihadists, revolutionary Iran, ethnic and religious clashes, and restive populations. But the region has also been shocked by the two recent oil price collapses--and by the very question of oil's future in the rest of this century.

A master storyteller and global energy expert, Daniel Yergin takes the reader on an utterly riveting and timely journey across the world's new map. He illuminates the great energy and geopolitical questions in an era of rising political turbulence and points to the profound challenges that lie ahead.
Daniel Yergin is "America's most influential energy pundit" (New York Times) and "one of the planet's foremost thinkers about energy and its implications" (Fortune). Dr. Yergin is the Pulitzer Prize-winning and bestselling author of The Prize: The Epic Quest for Oil, Money & Power, The Quest: Energy, Security, and the Remaking of the Modern World, and Shattered Peace: The Origins of the Cold War, and coauthor of Commanding Heights: The Battle for the World Economy. He is vice chairman of IHS Markit, one of the world's leading information and research firms.
“This should be mandatory reading for President-elect Joe Biden’s incoming team.” —Admiral James Stavridis

“A master class on how the world works.” —NPR

“[The New Map] earned energy’s highest literary prize for its ambitious survey and realistic assessment of energy and how it shapes all of human affairs. It is also an exceptional literary triumph in its narrative and in the quality of writing that we have come to expect from Dan Yergin.” —The American Energy Society, in awarding Daniel Yergin “Energy Writer of the Year”

“The veteran energy analyst Daniel Yergin has turned his considerable talents to explaining how the world continues to be shaped by oil in his latest book, The New Map: Energy, Climate, and the Clash of Nations . . . Reportorial and supremely readable—no mean feat among geostrategy tomes.” —Wall Street Journal

“At a time when solid facts and reasoned arguments are in retreat, Daniel Yergin rides to the rescue. The Pulitzer Prize-winning author and energy savant is armed to the teeth with enough telling statistics to sink an oil tanker in The New Map: Energy, Climate, and the Clash of Nations (Penguin Press, 512 pp., ★★★★ out of four) . . . Yergin provides an engaging survey course on the lifeblood of modern civilization—where the world has been and where it is likely headed. By the final page, the reader will feel like an energy expert herself.” —USA Today

“Brisk and authoritative, an impressive combination.” —The Economist

“The New Map is a kaleidoscopic survey of seemingly every geopolitical development in recent (and not so recent) history, all seen through the lens of energy, national rivalries, changing technologies, and the looming threat of climate change . . . Yergin, the vice chairman of the energy research powerhouse IHS Markit, is strongest when it comes to oil and gas, still the mainstays of the world’s energy supplies now and in the decades to come. Even readers familiar with the U.S. “shale gale” will find new gems in his retelling of the pioneers who shattered shale to unleash a revolution. Russia, today leveraging oil and gas the way it once wielded Marxist-Leninist ideas, also provides great grist for Yergin, as do China’s energy-driven forays into the South China Sea . . . Admirable, well-researched, highly readable examination.” —Foreign Policy

“The New Map is a must-read for those who are national security experts or aspire to be. Why? Because most national security professionals, this one included, have deep expertise on certain issues or regions, but we do not have it across the full range of the world’s most pressing issues. In The New Map, Yergin demonstrates this global mastery. He reviews critical historical decisions of key nations and international coalitions, as well as the inflection points where opportunities were lost or created, bringing us to today’s geopolitical environment. In the telling, the reader gains a much broader understanding of other nations’ historical perspectives, their leaders’ goals in the new world order, and how both factors influence nations’ actions today . . . Do yourself a favor, read this one. You’ll be glad you did.” —Cipher Brief

“At its heart, The New Map, by Daniel Yergin, is a book about power: both in the sense of power as fuel to move cars, tractor-trailers and oceangoing ships, to run factories and light up cities; but also power in the sense of political power, that nations wield to drive their economies toward opening up to world markets or to becoming more protectionist and insulated, to exert their influence over the trading patterns of their neighbors, and to wage war or work for a peaceful and mutually prosperous co-existence with the rest of the world.” —Houston Chronicle

“A lucid, judicious overview of global energy and its discontents.” —Publishers Weekly