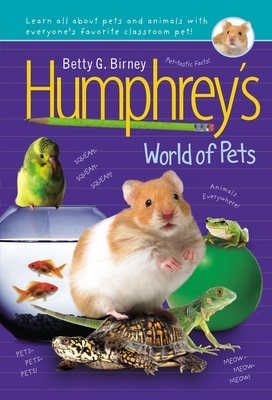 This nonfiction companion to the bestselling Humphrey series teaches readers all about animals and pet care. Filled with great facts about a variety of different animals, this book serves as a fun introduction to anyone interested in taking care of a pet. Also featured are cool tips, trivia, activities, and, of course, Humphrey himself to lead the way through it all!

Nominated for twenty-four state awards and the winner of seven, the Humphrey series is a hit across the country. And he's becoming a one school/one book favorite!

Betty Birney is an Emmy-winning television writer. She grew up in St. Louis. As children, her parents were neighbors living on Humphrey Street. www.bettybirney.com has tons of Humphrey activities.

Humphrey is on 24 state lists and counting!

The World According to Humphrey

North Carolina Battle of the Books