The Feeling of What Happens: Body and Emotion in the Making of Consciousness (Paperback) 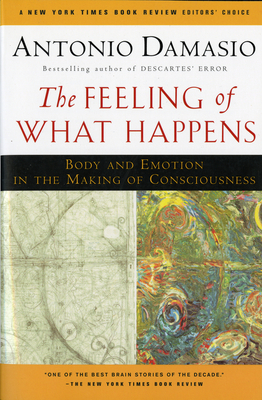 The Feeling of What Happens: Body and Emotion in the Making of Consciousness (Paperback)


On Our Shelves Now
The publication of this book is an event in the making. All over the world scientists, psychologists, and philosophers are waiting to read Antonio Damasio's new theory of the nature of consciousness and the construction of the self. A renowned and revered scientist and clinician, Damasio has spent decades following amnesiacs down hospital corridors, waiting for comatose patients to awaken, and devising ingenious research using PET scans to piece together the great puzzle of consciousness. In his bestselling Descartes' Error, Damasio revealed the critical importance of emotion in the making of reason. Building on this foundation, he now shows how consciousness is created. Consciousness is the feeling of what happens-our mind noticing the body's reaction to the world and responding to that experience. Without our bodies there can be no consciousness, which is at heart a mechanism for survival that engages body, emotion, and mind in the glorious spiral of human life. A hymn to the possibilities of human existence, a magnificent work of ingenious science, a gorgeously written book, The Feeling of What Happens is already being hailed as a classic.

ANTONIO DAMASIO is the David Dornsife Professor of Neuroscience and Director of the Brain and Creativity Institute at the University of Southern California. He is also an adjunct professor at the Salk Institute for Biological Studies in La Jolla. He is a member of both the Institute of Medicine of the National Academy of Sciences and the American Academy of Arts and Sciences. Descartes’ Error was an international bestseller. The Feeling of What Happens has been translated into seventeen languages.
"Antonio Damasio has done it again! Writing for the layman as well as the scientist, he constructs a compelling solution to the problem of consciousness."—Victoria Fromkin, UCLA
"This is an extraordinary book. I know of nothing like it."—Jerome Kagan, Harvard University
"There is no simpler way to say this: read the book to learn who you are."—Jorie Graham, Poet and Pulitzer Prize Winner
"Everyone will be talking about it; everyone will have to read it."—Patricia and Paul Churchland, UCSD