The Passion of Anne Hutchinson: An Extraordinary Woman, the Puritan Patriarchs, and the World They Made and Lost (Hardcover) 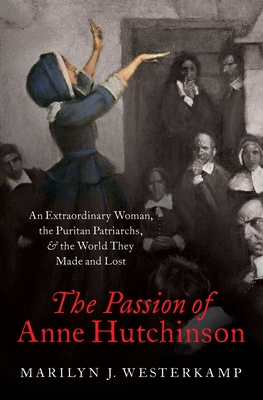 When English colonizers landed in New England in 1630, they constructed a godly commonwealth according to precepts gleaned from Scripture. For these 'Puritan' Christians, religion both provided the center and defined the margins of existence. While some Puritans were called to exercise power
as magistrates and ministers, and many more as husbands and fathers, women were universally called to subject themselves to the authority of others. Their God was a God of order, and out of their religious convictions and experiences Puritan leaders found a divine mandate for a firm, clear
hierarchy. Yet not all lives were overwhelmed; other religious voices made themselves heard, and inspired voices that defied that hierarchy. Gifted with an extraordinary mind, an intense spiritual passion, and an awesome charisma, Anne Hutchinson arrived in Massachusetts in 1634 and established herself as a leader of women. She held private religious meetings in her home and later began to deliver her own sermons. She inspired a large
number of disciples who challenged the colony's political, social, and ideological foundations, and scarcely three years after her arrival, Hutchinson was recognized as the primary disrupter of consensus and order--she was then banished as a heretic. Anne Hutchinson, deeply centered in her spirituality, heard in the word of God an imperative to ignore and move beyond the socially prescribed boundaries placed around women. The Passion of Anne Hutchinson examines issues of gender, patriarchal order, and empowerment in Puritan society through the
story of a woman who sought to preach, inspire, and disrupt.

Marilyn J. Westerkamp is Professor of History at the University of California, Santa Cruz. She is the author of Triumph of the Laity: Scots-Irish Piety and the Great Awakening and Women and Religion in Early America, 1600-1850