The Frontlines of Peace: An Insider's Guide to Changing the World (Hardcover) 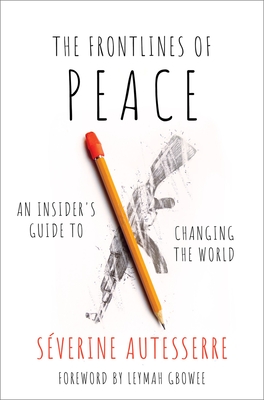 The Frontlines of Peace: An Insider's Guide to Changing the World (Hardcover)


On Our Shelves Now
At turns surprising, funny, and gut-wrenching, this is the hopeful story of the ordinary yet extraordinary people who have figured out how to build lasting peace in their communities The word "peacebuilding" evokes a story we've all heard over and over: violence breaks out, foreign nations are scandalized, peacekeepers and million-dollar donors come rushing in, warring parties sign a peace agreement and, sadly, within months the situation is back to where it started--sometimes worse. But what strategies have worked to build lasting peace in conflict zones, particularly for ordinary citizens on the ground? And why should other ordinary citizens, thousands of miles away, care? In The Frontlines of Peace, Severine Autesserre, award-winning researcher and peacebuilder, examines the well-intentioned but inherently flawed peace industry. With examples drawn from across the globe, she reveals that peace can grow in the most unlikely circumstances. Contrary to what most politicians preach, building peace doesn't require billions in aid or massive international interventions. Real, lasting peace requires giving power to local citizens. The Frontlines of Peace tells the stories of the ordinary yet extraordinary individuals and organizations that are confronting violence in their communities effectively. One thing is clear: successful examples of peacebuilding around the world, in countries at war or at peace, have involved innovative grassroots initiatives led by local people, at times supported by foreigners, often employing methods shunned by the international elite. By narrating success stories of this kind, Autesserre shows the radical changes we must take in our approach if we hope to build lasting peace around us--whether we live in Congo, the United States, or elsewhere.

Severine Autesserre is an award-winning author, peacebuilder, and researcher, as well as a Professor of Political Science at Barnard College, Columbia University. She is the author of The Trouble with the Congo and Peaceland, in addition to articles for publications such as The New York Times, The Washington Post, Foreign Affairs, and Foreign Policy. Autesserre has been involved intimately in the world of international aid for more than twenty years. She has conducted research in twelve different conflict zones, from Colombia to Somalia to Israel and the Palestinian territories. She has worked for Doctors Without Borders in places like Afghanistan and Congo, and at the United Nations headquarters in the United States. Her research has helped shape the intervention strategies of several United Nations departments, foreign affairs ministries, and non-governmental organizations, as well as numerous philanthropists and activists. She has also been a featured speaker at the World Summit of Nobel Peace Laureates and the U.S. House of Representatives.