The Rumble in the Jungle: Muhammad Ali and George Foreman on the Global Stage (Paperback) 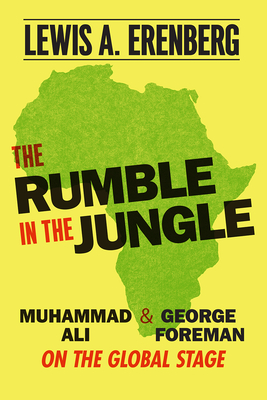 The Rumble in the Jungle: Muhammad Ali and George Foreman on the Global Stage (Paperback)


On Our Shelves Now
The 1974 fight between Muhammad Ali and George Foreman, staged in the young nation of Zaire and dubbed the Rumble in the Jungle, was arguably the biggest sporting event of the twentieth century. The bout between an ascendant undefeated champ and an outspoken master trying to reclaim the throne was a true multimedia spectacle. A three-day festival of international music—featuring James Brown, Miriam Makeba, and many others—preceded the fight itself, which was viewed by a record-breaking one billion people worldwide. Lewis A. Erenberg’s new book provides a global perspective on this singular match, not only detailing the titular fight but also locating it at the center of the cultural dramas of the day.

TheRumble in the Jungle orbits around Ali and Foreman, placing them at the convergence of the American Civil Rights movement and the Great Society, the rise of Islamic and African liberation efforts, and the ongoing quest to cast off the shackles of colonialism. With his far-reaching take on sports, music, marketing, and mass communications, Erenberg shows how one boxing match became nothing less than a turning point in 1970s culture.
Lewis A. Erenberg is professor of history at Loyola University of Chicago.

“Erenberg delivers a remarkably balanced account of both fighters in and out of the ring, before and after the fight. With the advantage of 45 years of perspective on the event and its sociopolitical context, Erenberg brings new insight to the fight’s complex racial dimension, and he deftly handles the fighters’ different takes on the Vietnam War. He effectively captures the overwrought rhetoric surrounding the fight, and his position as something other than a boxing insider (he is a Professor Emeritus in History at Loyola University in Chicago) brings a notably fresh interpretation to Ali’s upset victory. . . . The fight is the thing, and when Erenberg gets back to it, he scores heavily. . . . In a crowded field, this is a strong and surprising entry, right up there with Norman Mailer's The Fight.”
— Booklist (starred review)

“What The Rumble in the Jungle best demonstrates is how the advent of satellite technology and closed-circuit ticketed telecasts produced the lucrative global sports market we still live with.”

“Recommended. . . The strength of this work is its cultural and political commentary.”
— Choice

"This incredible contest receives the scholarly attention it deserves. . . . Students of history have much to gain from a nuanced exploration of the event. . . . An engaging, accessible, and welcome work."
— Journal of American History

"Very readable and entertaining. . . A much-needed academic treatment of the Ali-Foreman mega fight. Erenberg does a great job of connecting the match to its larger diasporic meaning. . . . A well-rounded examination of  one of the most iconic fights in boxing history."
— Journal of African American History

“An important and superbly written book. What makes The Rumble in the Jungle so convincing is Erenberg's extensive research, lively writing style, and detailed explorations of the biographies of Ali, Foreman, and the musicians, politicians, and business promoters encircling the fight. Although the fight between Ali and Foreman has received considerable commentary, Erenberg allows readers to understand its larger political significance for American and global history.”
— Lary May, author of The Big Tomorrow: Hollywood and the Politics of the American Way

“The Rumble in the Jungle has entered the realm of mythology, an event so fantastic it seems unreal. But in this smart, illuminating book, Erenberg reminds us that the Rumble really happened—and it was even more fantastic than we remembered. He fills in the gaps for boxing fans who know the story and provides essential history for those who do not.”
— Jonathan Eig, author of Ali: A Life

"In The Rumble in the Jungle, historian Lewis A. Erenberg provides readers with a remarkably fresh and exciting account of the1974 landmark world heavyweight title fight in Zaire where challenger Muhammad Ali knocked out heavily favored champion George Foreman. Even the most experienced and knowledgeable readers of boxing history and the life and times of Muhammad Ali will learn many new things from this engagingly written and well-researched work."
— The Common Reader