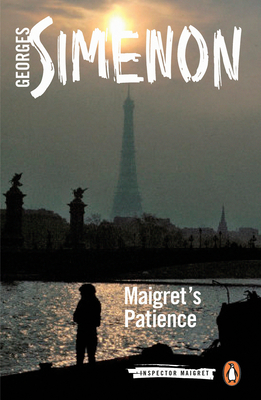 This is book number 64 in the Inspector Maigret series.

“One of the greatest writers of the twentieth century . . . Simenon was unequaled at making us look inside, though the ability was masked by his brilliance at absorbing us obsessively in his stories.” —The Guardian

Inspector Maigret is working on connecting an old nemesis to a string of robberies, but when the man is found dead, he must turn instead to hunting down his killer.

Maigret finds himself back on the Rue des Acacias just ten days after cracking another case there. This time, he is tasked with solving the murder of a criminal he has known for more than twenty years, one he always believed was behind a series of jewelry heists in the city. While the stakes rise, Maigret’s patience is tested as he eliminates suspects neighbor by neighbor in his hunt for the murderer.

A riveting mystery, Maigret’s Patience showcases the inimitable detective’s tireless mettle in the pursuit of the truth.
Georges Simenon (1903-1989) was born in Liège, Belgium. He is best known in the English-speaking world as the author of the Inspector Maigret books. His prolific output of more than four hundred novels and short stories has made him a household name in continental Europe.
Praise for Georges Simenon:

“One of the greatest writers of the twentieth century . . . Simenon was unequaled at making us look inside, though the ability was masked by his brilliance at absorbing us obsessively in his stories.” —The Guardian

“These Maigret books are as timeless as Paris itself.” —The Washington Post

“Maigret ranks with Holmes and Poirot in the pantheon of fictional detective immortals.” —People

“I love reading Simenon. He makes me think of Chekhov.” —William Faulkner

“The greatest of all, the most genuine novelist we have had in literature.” —André Gide

“A novelist who entered his fictional world as if he were a part of it.”lle —Peter Ackroyd