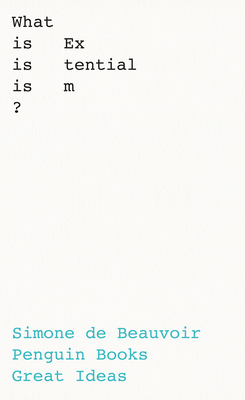 
On Our Shelves Now
The groundbreaking writings on the philosophy of the individual by iconic feminist and social thinker, Simone de Beauvoir

How should we think and act in the world? These writings on the human condition by one of the twentieth century's great philosophers explore the absurdity of our notions of good and evil, and show instead how we make our own destiny simply by being.

Throughout history, some books have changed the world. They have transformed the way we see ourselves - and each other. They have inspired debate, dissent, war and revolution. They have enlightened, outraged, provoked and comforted. They have enriched lives--and upended them. Now Penguin brings you a new set of the acclaimed Great Ideas, a curated library of selections from the works of the great thinkers, pioneers, radicals and visionaries whose ideas shook civilization and helped make us who we are.
Simone de Beauvoir (1908-1986) was a French philosopher, novelist, and essayist, and the lifelong companion of Jean-Paul Sartre. De Beauvoir's first book, L'Invitée, was published in 1943. In 1945 she published Le Sang des autres, a novel dealing with the question of political involvement. Beauvoir's breakthrough work was the semiautobiographical Les Mandarins (1954), which won the Prix Concourt. Roman Catholic authorities banned it and de Beauvoir's feminist classic The Second Sex (1949), in which de Beauvoir argued that "one is not born a woman; one becomes one."