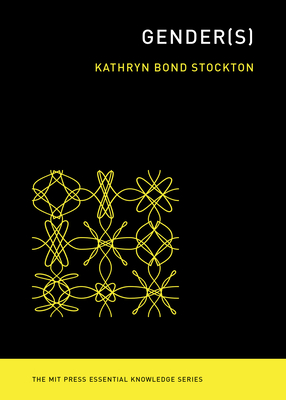 
On Our Shelves Now
Why gender is strange, even when it's played straight, and how race and money are two of its most dramatic ingredients.

In this volume in the MIT Press Essential Knowledge series, Kathryn Bond Stockton explores the fascinating, fraught, intimate, morphing matter of gender. Stockton argues for gender's strangeness, no matter how "normal" the concept seems; gender is queer for everyone, she claims, even when it's played quite straight. And she explains how race and money dramatically shape everybody's gender, even in sometimes surprising ways. Playful but serious, erudite and witty, Stockton marshals an impressive array of exhibits to consider, including dolls and their new gendering, the thrust of Jane Austen and Lil Nas X, gender identities according to women's colleges, gay and transgender ballroom scenes, and much more.
Stockton also examines gender in light of biology's own strange ways, its out-of-syncness with "male" and "female," explaining attempts to fortify gender with clothing, language, labor, and hair. She investigates gender as a concept--its concerning history, its bewitching pleasures and falsifications--by meeting the moment of where we are, with its many genders and counters-to-gender. This compelling background propels the question that drives this book and foregrounds race: what is "the opposite sex," after all? If there is no opposite, doesn't the male/female duo undergirding gender come undone?
Kathryn Bond Stockton is Distinguished Professor of English and inaugural Dean of the School for Cultural and Social Transformation at the University of Utah. She is the author of Beautiful Bottom, Beautiful Shame: Where "Black" Meets "Queer," The Queer Child, or Growing Sideways in the Twentieth Century (both finalists for the Lambda Literary Award in LGBT Studies), and Making Out (finalist for the Next Generation Indie Book Award for memoir), among other books.
"Stockton presents an accessible, witty and contemporary examination of the true queerness of genders and gendering." —Ms.