The Quick and the Dead: Selected Stories (The Margellos World Republic of Letters) (Hardcover) 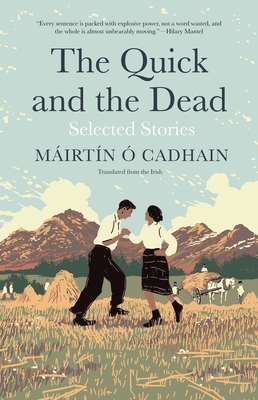 The Quick and the Dead: Selected Stories (The Margellos World Republic of Letters) (Hardcover)


On Our Shelves Now
A collection of the finest stories from the Irish author of The Dirty Dust, published fifty years after his death

“Every sentence is packed with explosive power, not a word wasted, and the whole is almost unbearably moving.”—Hilary Mantel

These colorful tales from renowned Irish author Máirtín Ó Cadhain (1906–1970) whisk readers to the salty western shores of Ireland, where close‑knit farming communities follow the harsh rhythms of custom, family, and land, even as they dream together of a kinder world. In this collection, the resilient women and men of the Gaeltacht regions struggle toward self‑realization against the brutal pressures of rural poverty, and later, the hollowing demands of modern city life.

Weaving together tradition and modernity, and preserving the earthy cadence of the original language, this rich and heart-rending collection by one of Ireland’s most acclaimed fiction writers is a composite portrait of a country poised at the edge of irreversible transformation.
Máirtín Ó Cadhain was born in An Cnocán Glas, Cois Fharraige, Connemara. He is best known for his novel Cré na Cille, which has been translated into English as The Dirty Dust and Graveyard Clay. Louis de Paor is professor of Irish studies at the National University of Ireland, Galway.
“Ó Cadhain pays tribute to both his own unpredictable life and those of the characters he conjured from his neighbors.”—John L. Murphy, Spectrum Culture

“One of the most visionary writers ever to come out of Ireland.”—Belinda McKeon, Irish Independent

“Every sentence is packed with explosive power, not a word wasted, and the whole is almost unbearably moving.”—Hilary Mantel

"This is an important collection. An encounter with Ó Cadhain's work broadens the entire landscape of the Irish short story. It becomes darker, more far flung, and imaginatively turbulent."—Mike McCormack

"Ó Cadhain's stories are an integral part of the radical, antic, and mischievous stream of work that began to flow through Irish writing in the mid-twentieth century—in a happy alternative universe, he might be as celebrated now as Flann O'Brien or Samuel Beckett. He was an innovator and a glorious comedian."—Kevin Barry