Culture Warlords: My Journey Into the Dark Web of White Supremacy (Hardcover) 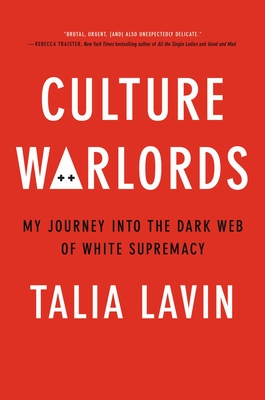 Culture Warlords: My Journey Into the Dark Web of White Supremacy (Hardcover)

One reporter takes an immersive dive into white supremacy's explosive online presence, exploring the undercurrents of propaganda, racism, misogyny, and history that led us to where we are now.

Talia Lavin is every skinhead's worst nightmare: a loud and unapologetic Jewish woman, acerbic, smart, and profoundly antiracist, with the investigative chops to expose the tactics and ideologies of online hatemongers.

Culture Warlords is the story of how Lavin, a frequent target of extremist trolls (including those at Fox News), dove into a byzantine online culture of hate and learned the intricacies of how white supremacy proliferates online. Within these pages, she reveals the extremists hiding in plain sight online: Incels. White nationalists. White supremacists. National Socialists. Proud Boys. Christian extremists. In order to showcase them in their natural habitat, Talia assumes a range of identities, going undercover as a blonde Nazi babe, a forlorn incel, and a violent Aryan femme fatale. Along the way, she discovers a whites-only dating site geared toward racists looking for love, a disturbing extremist YouTube channel run by a fourteen-year-old girl with over 800,000 followers, the everyday heroes of the antifascist movement, and much more. By combining compelling stories chock-full of catfishing and gate-crashing with her own in-depth, gut-wrenching research, she also turns the lens of anti-Semitism, racism, and white power back on itself in an attempt to dismantle and decimate the online hate movement from within.

Shocking, humorous, and merciless in equal measure, Culture Warlords explores some of the vilest subcultures on the Web-and shows us how we can fight back.
Talia Lavin is a writer who has had bylines in the New Yorker, the New Republic, the New York Times Review of Books, the Washington Post, the Village Voice, and more.
*** A NEW YORK TIMES BOOK REVIEW Editor's Choice/Staff Pick *** TIME MAGAZINE, "100 Must-Read Books of 2020" ***

ColorLines, "30 Books to Get You Through Fall"

“One of the marvels of this furious book is how insolent and funny Lavin is; she refuses to soft-pedal the monstrous views she encounters.”—New York Times Book Review

“Lavin is an entertaining Virgil for this neo-Nazi hell...She forges engaging narrative paths through the distant and near history of the alt-right.”
—Carolyn Kellogg for The New York Times

"Culture Warlords is filled with solid reporting, plenty of invective, and lots of fearless infiltration exposing how the internet has helped expand a far-right culture of hatred and violence."—Daily Beast

"...Culture Warlords should be at the top of your reading list."—Bitch Media

"[In this book, Lavin] unmask[s] white supremacists in public, denying them respectability and anonymity.”—The New Republic

"An incredibly effective alarm about the dangers — both moral and physical — white supremacy."—Jewish News

"[Lavin's] notes... are hilarious even as they give us a better understanding of what the more obscure communities of the internet are hiding."—The Lit Hub

"Lavin takes investigative journalism to the next level... This is a heavy read, but an important one."—Library Journal

"In Culture Warlords, Talia Lavin capably leads readers through chilly tunnels of loathing, burrowing deep into dens of violent racism, anti-Semitism, and misogyny. She describes communities of hate and how they're growing with precision, seriousness, and humor. Even as she takes on multiple identities, readers will find in her a steady and often lyrical guide: transparent about her fears, fury, and ever-changing sense of self. Culture Warlords is surely brutal and urgent; it is also unexpectedly delicate."—REBECCA TRAISTER, New York Times bestselling author of All the Single Ladies and Good and Mad

"Talia Lavin's Culture Warlords is a necessary and urgent read that could not have come at a much better time. You will be astounded at the depths to which Lavin sinks to expose how far and wide white supremacy spreads across both real-life meetings and internet communities. Thoroughly researched and engaging, this debut demonstrates the work of a fearless reporter."—MORGAN JERKINS, NewYork Times bestselling author of This Will Be My Undoing and Wandering in Strange Lands

"As someone who has gone undercover and waded through the dark trenches of white supremacy, I know firsthand how jarring it can be to find yourself in the belly of the beast-and the courage it takes to dig your way to the other side. Culture Warlords is a searingly original and breathtaking feat of fearless journalism, and it is required reading for anyone who seeks to understand the nefarious context for the world we live in today."—RON STALLWORTH, New York Times bestselling author of Black Klansman

"Culture Warlords is a shock to the system-an urgent, incendiary work that takes us into the most hate-filled corners of American culture. Having immersed herself, Gonzo-style, in a toxic online world where white supremacy is the norm, Talia Lavin shows us the fun-house mirror reflection of American culture. Lavin writes like her hands are on fire, forcing us to take a hard look at our nation's ugliest truths."—PAMELA COLLOFF, New York Times Magazine and ProPublica

“A passionate book, and all the better for it since by immersing her readers in the unreality of the white-nationalist and far-right universe, most of us are jolted into both an intellectual and a visceral understanding of what we're up against.”—Daily Kos

“Required reading for everyone who talks about whether and how to regulate the internet.”—ZD Net

“Equal parts gonzo journalism and sociological study of the rise of the modern alt-right, the book is a disturbing but compelling portrait of contemporary hatred and the people who perpetrate it, all told in Ms. Lavin’s deeply confident, emotionally wrenching prose. It’s the rare book that simultaneously offers a vital big-picture overview of a social phenomenon and also makes you care deeply about the author as a character in her own right.” (From the WHO READ WHAT feature)
—Tara Isabella Burton, author, most recently of Strange Rites: New Religions for a Godless World, Wall Street Journal

“An energetic and enlightening read and highly recommended.”—Counterpunch