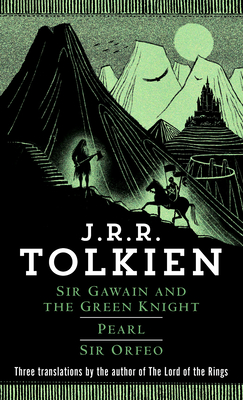 
On Our Shelves Now
Three masterpieces of medieval poetry, translated by the author of The Lord of the Rings—including Sir Gawain and the Green Knight, the poem that inspired the major motion picture The Green Knight

Comparable to the works of Chaucer, Sir Gawain and the Green Knight, Pearl, and Sir Orfeo weave a bright tapestry of stories from a remote age of chivalry and wizards, knights and holy quests—but unlike The Canterbury Tales, the name of the poet who wrote them is lost to time. Masterfully translated from the original Middle English by J.R.R. Tolkien, the language of these great poems comes to life for modern readers.

At the center of this collection is Sir Gawain and the Green Knight, a tale as lush and dark as England’s medieval forests. Mixing romance and adventure, Sir Gawain follows King Arthur’s most noble knight on an adventure of epic enchantment, temptation, and destiny.
John Ronald Reuel Tolkien was born on January 3, 1892, in Bloemfontein, South Africa. After serving in World War I, he embarked upon a distinguished academic career and was recognized as one of the finest philologists in the world. He was a professor of Anglo-Saxon at Oxford, a fellow of Pembroke College, and a fellow of Merton College until his retirement in 1959. He is, however, beloved throughout the world as the creator of Middle-earth and author of such classic works as The Hobbit and The Lord of the Rings. He died on September 2, 1973, at the age of eighty-one.