The World Turned Upside Down: A History of the Chinese Cultural Revolution (Hardcover) 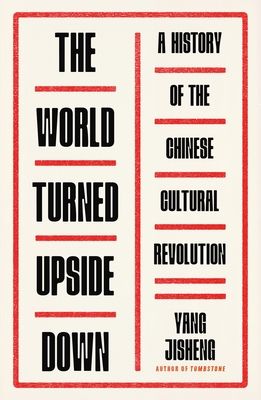 The World Turned Upside Down: A History of the Chinese Cultural Revolution (Hardcover)

Yang Jisheng’s The World Turned Upside Down is the definitive history of the Cultural Revolution, in withering and heartbreaking detail.

As a major political event and a crucial turning point in the history of the People’s Republic of China, the Great Proletarian Cultural Revolution (1966–1976) marked the zenith as well as the nadir of Mao Zedong’s ultra-leftist politics. Reacting in part to the Soviet Union’s "revisionism" that he regarded as a threat to the future of socialism, Mao mobilized the masses in a battle against what he called "bourgeois" forces within the Chinese Communist Party (CCP). This ten-year-long class struggle on a massive scale devastated traditional Chinese culture as well as the nation’s economy.

Following his groundbreaking and award-winning history of the Great Famine, Tombstone, Yang Jisheng here presents the only history of the Cultural Revolution by an independent scholar based in mainland China, and makes a crucial contribution to understanding those years' lasting influence today.

The World Turned Upside Down puts every political incident, major and minor, of those ten years under extraordinary and withering scrutiny, and arrives in English at a moment when contemporary Chinese governance is leaning once more toward a highly centralized power structure and Mao-style cult of personality.

Yang Jisheng was born in 1940, joined the Communist Party in 1964, and worked for the Xinhua News Agency from January 1968 until his retirement in 2001. He is now a deputy editor at Yanhuang Chunqiu (Chronicles of History), an official journal that regularly skirts censorship with articles on controversial political topics. He is the author of the book Tombstone.

Stacy Mosher learned Chinese in Hong Kong, where she lived for nearly 18 years. She is the co-translator of Yang Jisheng's Tombstone. A long-time journalist, Mosher currently works as an editor and translator in Brooklyn.

Guo Jian is Professor of English at the University of Wisconsin-Whitewater. Originally trained in Chinese language and literature, Guo was on the Chinese faculty of Beijing Normal University until he came to the United States to study for his PhD in English in the mid-1980’s. He was a translator of Yang Jisheng's Tombstone.

"Monumental . . . Yang now brings his reputation as one of China's most daring historical writers to another open wound in modern Chinese history, the Cultural Revolution . . . The World Turned Upside Down is a formidable work of research and analysis, and Stacy Mosher and Guo Jian’s lucid translation is a major achievement . . . Read this book to be reminded about one of China's darkest periods, and to mourn that so much of its modern history is still, ironically and tragically, told outside the country's own borders."
—Rana Mitter, Financial Times

"Rather than being chastened, Yang has done it again . . . Yang’s book has no heroes, only swarms of combatants engaged in a “repetitive process in which the different sides took turns enjoying the upper hand and losing power, being honored and imprisoned, and purging and being purged”—an inevitable cycle, he believes, in a totalitarian system. Yang . . . benefited from the recent work of other undaunted chroniclers, whom he credits for many chilling new details about how the violence in Beijing spread to the countryside.”
—Barbara Demick, The Atlantic

“A potent and sprawling history of the Cultural Revolution, a little-understood and catastrophic decade in modern Chinese history . . . Essential . . . [The World Turned Upside Down] belongs alongside The Gulag Archipelago as a denunciation of tyranny.”
—Kirkus Reviews