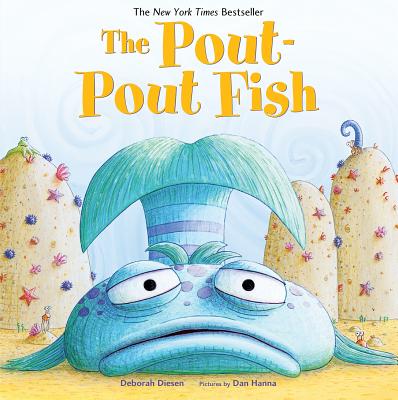 This is book number 1 in the A Pout-Pout Fish Adventure series.

Deep in the water,
Mr. Fish swims about
With his fish face stuck
In a permanent pout.

Can his pals cheer him up?
Will his pout ever end?
Is there something he can learn
From an unexpected friend?

Swim along with the pout-pout fish as he discovers that being glum and spreading "dreary wearies" isn't really his destiny. Bright ocean colors and playful rhyme come together in this fun fish story that's sure to turn even the poutiest of frowns upside down.

The Pout-Pout Fish is a 2009 Bank Street - Best Children's Book of the Year.

Deborah Diesen has worked as a bookseller, bookkeeper, and reference librarian. Her first book, The Pout-Pout Fish, was a New York Times bestseller and one of Time magazine’s Top 10 Children’s Books of the Year. She lives in Michigan with her family.

Dan Hanna has over ten years’ experience in the animation industry, and his work has appeared on BBC America and the Cartoon Network. He lives in Oxnard, California.

Dan Hanna has over ten years’ experience in the animation industry, and his work has appeared on BBC America and the Cartoon Network. He lives in Oxnard, California.

“Younger kids will love the repetition of the verses in this tale of a pout-pout fish.” —TIME magazine, from its Top 10 Childrens' Books of 2008 List

“Appealing...the cartoon illustrations of undersea life are bright and clean and the protagonist's exaggerated expressions are entertaining.” —School Library Journal

“Diesen's clever rhymes are playful and fun and are sure to keep children's imaginations swimming from page to page.” —Times Record News