The Story of My Purity: A Novel (Paperback) 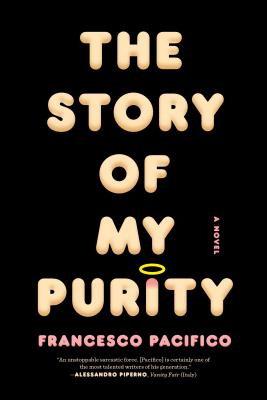 An exuberant tale of a man caught between faith and freedom, from one of Italy's most talented young novelists

Thirty years old, growing flabby in a sexless marriage, Piero Rosini has decided to dedicate his life to Jesus. He's renounced the novels and American music that were filling his head with bullshit; he's moved out of his fancy bourgeois neighborhood, which was keeping him from finding spiritual purity and the Lord's truth. Now that he and his wife have settled into an unfinished housing development on the far outskirts of Rome, he'll be able to really concentrate on his job at an ultraconservative Catholic publishing house, editing books that highlight the decadence and degradation of modern society, including one claiming that Pope John Paul II was secretly Jewish. But Piero is suffocating. He worries that The Jewish Pope might be taking things too far. He can't get his beautiful sister-in-law out of his head. Temptations are breaking down his religious resolve. He decides to flee to Paris, which turns out not to be the best way of guarding his purity.

With a charismatic narrator as familiar with the finer points of Christian theology as with the floor layout of IKEA and the schedules of European budget airlines, Francesco Pacifico's exuberant novel brings us Europe old and new and the inner workings of a conflicted but always compelling mind. The Story of My Purity is fiction with great humor, intelligence, neuroticism, and vision, from a young writer at the beginning of a tremendous career.

Francesco Pacifico has written for a number of Italian publications, as well as for Rolling Stone, n+1, and GQ, and has translated the works of Henry Miller, Allen Ginsberg, Dave Eggers, Dana Spiotta, Will Eisner, and more. He is the author of the novels The Story of My Purity and Class. He lives in Rome.

“Francesco Pacifico is a brilliantly funny and weirdly subversive writer. The Story of My Purity manages to be both absurd and sincere; it is impossible to resist Piero Rosini's precise narration of his struggle to be a saint as he endures so many earthly temptations. A joy to read.” —Dana Spiotta, author of Stone Arabia

“Ho, ho, and ho! Insanely funny and terrifically offensive, Francesco Pacifico's novel fell on my head like a bowling ball and knocked me the hell out. Among many other things, it's a great updating of Roman life. American publishers don't really translate from the Italiano anymore, so it's great to see a worthy translation of what is sure to be a modern Italian classic.” —Gary Shteyngart, author of Super Sad True Love Story

“An unstoppable sarcastic force. [Pacifico] is certainly one of the most talented writers of his generation.” —Alessandro Piperno, Vanity Fair (Italy)

“With these viscerally honest and hilarious adventures of a young Roman struggling to free himself from the cynicism of Berlusconi's ‘bunga bunga' Italy and the moral absolutism of the Catholic Church, Francesco Pacifico revives the Italian comic novel. The writing is ribald but never vulgar, extremely smart about friendship and sex but without pretension. You'll laugh aloud, want to hide your blushing face in the pillow, and argue with the author, all at once.” —Marco Roth, author of The Scientists

“Piero Rosini is the extraordinary main character of The Story of My Purity, a rich and surprising, bright and liberal novel, dense with stories and even courageous because of the topics it deals with and the profound lightness with which it deals with them.” —Ivan Cotroneo, Rolling Stone