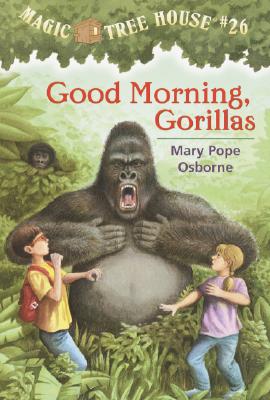 This is book number 26 in the Magic Tree House series.

The Magic Tree House whisks Jack and Annie off to the mountains of Africa. There they run into a huge mountain gorilla At first they don t know whether they should shake hands or turn tail. But the ominous-looking creature turns out to be surprisingly gentle. Not only that, the gorilla may be able to help them learn their next bit of magic, which Morgan has challenged them to do.
MARY POPE OSBORNE is the author of the "New York Times" number one bestselling Magic Tree House series. She and her husband, writer Will Osborne (author of "Magic Tree House: The Musical"), live in northwestern Connecticut with their three dogs. Ms. Osborne is also the coauthor of the companion Magic Tree House Fact Trackers series with Will, and with her sister, Natalie Pope Boyce.

SAL MURDOCCA has illustrated more than 200 children's trade and text books. He is also a librettist for children's opera, a video artist, an avid runner, hiker, and bicyclist, and a teacher of children's illustration at the Parsons School of Design. Sal lives and works in New York with his wife, Nancy. "From the Trade Paperback edition.""