The Teacher Wars: A History of America's Most Embattled Profession (Hardcover) 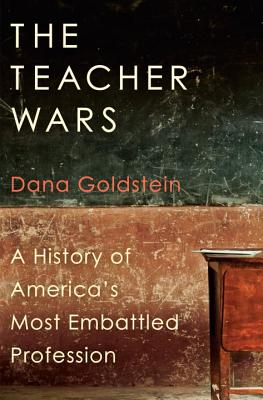 The Teacher Wars: A History of America's Most Embattled Profession (Hardcover)


Email info@literatibookstore.com or call for price
In her groundbreaking history of175 years of American education, Dana Goldstein finds answers in the past to the controversies that plague ourpublic schools today.
Teaching is a wildly contentious profession in America, one attacked and admired in equal measure. In "The Teacher Wars," a rich, lively, and unprecedented history of public school teaching, Dana Goldstein reveals that teachers have been similarly embattled for nearly two centuries. From the genteel founding of the common schools movement in the nineteenth century to the violent inner-city teacher strikes of the 1960s and '70s, from the dispatching of Northeastern women to frontier schoolhouses to the founding of Teach for America on the Princeton University campus in 1989, Goldstein shows that the same issues have continued to bedevil us: Who should teach? What should be taught? Who should be held accountable for how our children learn?
She uncovers the surprising roots of hot button issues, from teacher tenure to charter schools, and finds that recent popular ideas to improve schools institutingmerit pay, evaluating teachers by student test scores, ranking and firing veteran teachers, and recruiting elite graduates to teach are all approaches that have been tried in the past without producing widespread change. And she also discovers an emerging effort that stands a real chance of transforming our schools for the better: drawing on the best practices of the three million public school teachers we already have in order to improve learning throughout our nation's classrooms.
"The Teacher Wars" upends the conversation about American education by bringing the lessons of history to bear on the dilemmas we confront today. By asking How did we get here? Dana Goldstein brilliantly illuminates the path forward.
DANA GOLDSTEIN comes from a family of public school educators. She received theSpencer Fellowship in Education Journalism, a Schwarz Fellowship at the New America Foundation, and a Puffin Foundation Writing Fellowship at the Nation Institute. Her journalism is regularly featured in "Slate," "The Atlantic," "The Nation," "The Daily Beast," and other publications, and she is a staff writer at the Marshall Project. She lives in New York City.Her social policy blog isdanagoldstein.com."