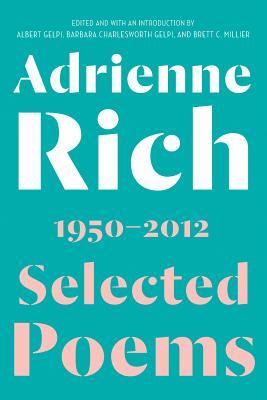 Adrienne Rich was the singular voice of her generation, bringing discussions of gender, race, and class to the forefront of poetical discourse. This generous selection from all nineteen of Rich’s published poetry volumes encompasses her best-known work—the clear-sighted and passionate feminist poems of the 1970s, including “Diving into the Wreck,” “Planetarium,” and “The Phenomenology of Anger”—and offers the full range of her evolution as a poet. From poems leading up to her feminist breakthrough through bold later work such as “North American Time” and “Calle Visión,” Selected Poems celebrates Rich’s prophetic vision as well as the inventiveness that shaped her enduring art.

Adrienne Rich (1929–2012) was an award-winning poet, influential essayist, radical feminist, and major public intellectual of the twentieth and twenty-first centuries. She wrote two dozen volumes of poetry, including the National Book Award–winning Diving into the Wreck, and more than a half-dozen of prose.

Albert Gelpi is William Robertson Coe Professor of American Literature at Stanford University, where he has also taught since 1968. His books include Emily Dickinson: The Mind of the Poet, The Tenth Muse: The Psyche of the American Poet, and, most recently, A Coherent Splendor: The American Poetic Renaissance, 1910-1950. He is the editor of Wallace Stevens: The Poetics of Modernism and Denise Levertov: Selected Criticism and for a decade edited Cambridge Studies in American Literature and Culture.

Barbara Charlesworth Gelpi is Professor of English at Stanford University, where she has taught since 1968. She is the author of Shelleyís Goddess: Maternity, Language, Subjectivity and Dark Passages: The Decadent Consciousness in Victorian Literature, as well as numerous articles on, mainly, feminist and psychological literature. She is an editor of several important volumes, including Feminist Theory: A Critique of Ideologies and Women and Poverty.

Brett C. Millier is the Reginald L. Cook Professor of American Literature at Middlebury College. She is the author of Elizabeth Bishop: Life and the Memory of It, and Flawed Light: American Women Poets and Alcohol. She is also associate editor of The Columbia History of American Poetry.
Rich is one of the greatest American poets of the past half century.
— San Francisco Chronicle

Rich’s poems, volume after volume, have been the makings of one of the authentic, unpredictable, urgent, essential voices of our time.
— W. S. Merwin