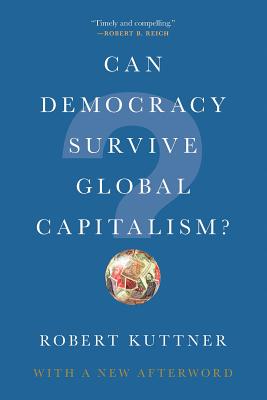 “Democracy is no longer writing the rules for capitalism; instead it is the other way around. With his deep insight and wide learning, Kuttner is among our best guides for understanding how we reached this point and what’s at stake if we stay on our current path.”—Heather McGhee, president of Demos

With a new Afterword

In the past few decades, the wages of most workers have stagnated, even as productivity increased. Social supports have been cut, while corporations have achieved record profits. What is going on? According to Robert Kuttner, global capitalism is to blame. By limiting workers’ rights, liberating bankers, and allowing corporations to evade taxation, raw capitalism strikes at the very foundation of a healthy democracy. Capitalism should serve democracy and not the other way around. One result of this misunderstanding is the large number of disillusioned voters who supported the faux populism of Donald Trump. Charting a plan for bold action based on political precedent, Can Democracy Survive Global Capitalism? is essential reading for anyone eager to reverse the decline of democracy in the West.

Robert Kuttner, cofounder and coeditor of the American Prospect, is a former columnist for BusinessWeek, the Washington Post, and the Boston Globe. He holds the Ida and Meyer Kirstein Chair at Brandeis University, and lives in Boston.
A timely polemic against globalization and marketization.… [Robert Kuttner is]… something of a national treasure.… Kuttner has tirelessly poked holes in dominant economic narratives and consistently espoused a social-democratic populism that is looking much better than some of the alternatives these days.
— New York Times Book Review

Timely and compelling.
— Robert B. Reich

Using historical synthesis and reporting, [Kuttner] explores how [unfettered global finance’s] resurgence captured the political process and cut off policy approaches that could have protected the interests of workers and nations, leading to disillusionment with political institutions and the rise of ideological extremes. Kuttner’s call to recognize and fight this status quo doesn’t come with easy solutions, but it will inspire readers to think deeply about our complex and troubling times.
— Booklist

[A] vigorous critique.… Capitalism as we know it today is anti-democratic—and not likely to relinquish power without a fight. A useful resource for setting agendas.
— Kirkus Reviews

Robert Kuttner combines economic acumen, a gift for narrative, and genuine passion in his persuasive new book. In his telling, the issue isn’t whether national economies should be open to foreign trade or finance. It’s whether the rules of the global economy are set up to benefit ordinary citizens or merely economic elites.
— Jacob S. Hacker, Yale University, and coauthor of Winner-Take-All Politics

Kuttner brilliantly brings together two strands of thought: explaining both the economics and politics of global capitalism and how our society has abandoned core principles of fairness and equality. The rise of inequality helped pave the way for Donald Trump—a figure out of step with basic American values. Kuttner reminds us of the urgency with which we need to get back to a more just society.
— Joseph E. Stiglitz, Columbia University, winner of the Nobel Prize in Economics, and best-selling author of The Price of Inequality

Standing on the shoulders of Karl Polanyi, Bob Kuttner revives the lost art of political economy in this absorbing and important analysis of wild markets, assaults on labor, and profound changes to institutional rules.
— Ira Katznelson, Columbia University, and author of the Bancroft Prize-winning Fear Itself: The New Deal and the Origins of Our Time

Conventional wisdom has it that our income disparities and dysfunctional politics are the consequence of inexorable and uncontrollable developments in technology, market competition, and globalization. As Robert Kuttner argues in this superb book, they are instead the result of our own policy choices.
— Dani Rodrik, Harvard University, and author of Straight Talk on Trade and The Globalization Paradox