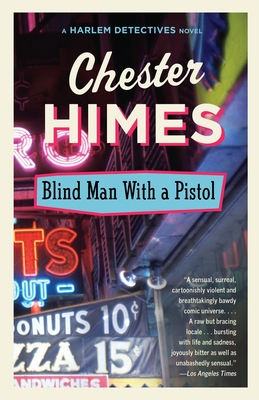 This is book number 8 in the Harlem Detectives Series series.

At once grotesquely comic and unflinchingly violent, Blind Man With a Pistol is the final entry in Chester Himes's trailblazing Harlem Detectives series.

New York is sweltering in the summer heat, and Harlem is close to the boiling point. To Coffin Ed Johnson and Grave Digger Jones, at times it seems as if the whole world has gone mad. Trying, as always, to keep some kind of peace—their legendary nickel-plated Colts very much in evidence—Coffin Ed and Grave Digger find themselves pursuing two completely different cases through a maze of knifings, beatings, and riots that threaten to tear Harlem apart.

Chester Himes was born in Missouri in 1909. He began writing while serving a prison sentence for a jewel theft and published just short of twenty novels before his death in 1984. Among his best-known thrillers are Blind Man with a Pistol, Cotton Comes to Harlem, The Crazy Kill, A Rage in Harlem, The Real Cool Killers, and The Heat's On, all available from Vintage.

“One of the most important American writers of the 20th century. . . . A quirky American genius.” —Walter Mosley

“Chester Himes is one of the towering figures of the black literary tradition. His command of nuances of character and dynamics of plot is preeminent among writers of crime fiction. He is a master craftsman.” —Henry Louis Gates, Jr.

“Their deft mixture of race relations and police-work are as entertaining as sociology as they are as mysteries.” —The Boston Globe