Square Haunting: Five Writers in London Between the Wars (Paperback) 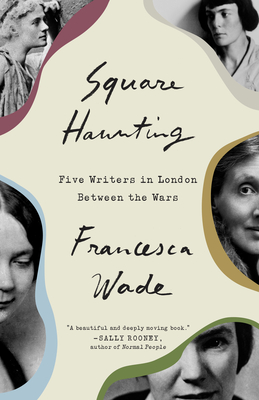 Square Haunting: Five Writers in London Between the Wars (Paperback)

"Square Haunting takes up [Virginia] Woolf's call for a different sort of history: it is a biography of five great women, about feelings and drawing rooms, but also about work, politics, literature and community. And, indeed, about war, which affected each of these lives deeply."

This group portrait of "five great women" who lived in Mecklenburg Square, London between the wars is history told by a fantastic storyteller. These women, and their time, come alive in vivid detail. The famous men who often get the limelight appear here as decidedly supporting cast. I alternated between outrage at the ridiculous obstacles put in these women's way by a thoroughly sexist culture and pride that women do manage, despite all that, to be great. I can't wait to see what Wade writes next.

An engrossing group portrait of five women writers, including Virginia Woolf, who moved to London’s Mecklenburgh Square in search of new freedom in their lives and work.

NAMED ONE OF THE BEST BOOKS OF THE YEAR BY POPMATTERS

“I like this London life . . . the street-sauntering and square-haunting.”—Virginia Woolf, diary, 1925

In the early twentieth century, Mecklenburgh Square—a hidden architectural gem in the heart of London—was a radical address. On the outskirts of Bloomsbury known for the eponymous group who “lived in squares, painted in circles, and loved in triangles,” the square was home to students, struggling artists, and revolutionaries.

In the pivotal era between the two world wars, the lives of five remarkable women intertwined at this one address: modernist poet H. D., detective novelist Dorothy L. Sayers, classicist Jane Harrison, economic historian Eileen Power, and author and publisher Virginia Woolf. In an era when women’s freedoms were fast expanding, they each sought a space where they could live, love, and—above all—work independently.

With sparkling insight and a novelistic style, Francesca Wade sheds new light on a group of artists and thinkers whose pioneering work would enrich the possibilities of women’s lives for generations to come.

“A fascinating voyage through the lives of five remarkable women . . . moving and immersive.”—Edmund Gordon, author of The Invention of Angela Carter: A Biography

“Elegant, erudite, and absorbing, Square Haunting is a startlingly original debut, and Francesca Wade is an author to watch.”—Frances Wilson, author of Guilty Thing: A Life of Thomas De Quincey

“Outstanding . . . I’ll be recommending this all year.”—Sarah Bakewell, author of At the Existentialist Café

“I much enjoyed Francesca Wade's book. It almost made me wish I belonged to the pioneering generation of women spoiling eggs on the gas ring and breaking taboos.”—Sue Prideaux, author of I Am Dynamite! A Life of Friedrich Nietzsche
Francesca Wade has written for publications including the London Review of Books, The Times Literary Supplement, The Paris Review, The New York Times and Granta. She is editor of The White Review and a winner of the Biographers’ Club Tony Lothian Prize. She lives in London.
“Riveting . . . vividly written . . . Wade offers us a timely invitation to join our literary foremothers in their rebellious journeys to achieve creative freedom and world harmony.”—Blanche Wiesen Cook, The New York Times Book Review

“Fascinating . . . In telling their stories—which collide, overlap and echo one another—Wade follows the messy, inspiring destinies of women who fought to rise above social restrictions, oppressive notions of femininity and the condescension of men who were nearly always their inferiors.” —NPR “Fresh Air”

“Square Haunting is at once a tribute to Virginia Woolf’s powerful concept of a woman’s need for a room of her own, and an exploration of the contradictions and messy compromises so often involved in fulfilling that need. . . . A very readable and enjoyable book.”—Margaret Drabble, The New Statesman

“Captivating . . . superb . . . Wade has pulled off a remarkable feat of intellectual and social history with her erudite yet juicy first book. . . . An engaging narrative, movingly bookended by descriptions of the obliteration of a world she so vividly evokes. . . . This impressive feminist history stands as an elegiac love letter to a bygone time and place that offered brilliant, iconoclastic women a unique opportunity for freedom and self-expression.”—Wall Street Journal

“Endlessly interesting, unshowy, tightly argued and large-hearted. . . . The women’s characters and situations leap off the page, helped by the kind of details—from interior décor to what they wore—that bring prose alive. . . . Wade reframes half a century of supposedly familiar literary and intellectual history and illustrates everything Woolf meant by ‘a room of one’s own’.”—Aida Edemariam, The Guardian

“Powerful . . . Just as Harrison and Power rewrote history to include the lives of forgotten women, so Wade reestablishes the importance of thinkers like Power and H.D., whose legacies have been eclipsed by those of their male contemporaries.”—The New Yorker

“Serious, stylish . . . It is a pleasure to fall into step with the eloquent, elegant Wade as she stamps the streets of literary London. I would give a copy to every young woman graduating from university and wondering who and how to be.”—Laura Freeman, The Times

"Original and erudite. . . . Wade is adept at evoking the gritty texture of the times, taking us seamlessly from the interior lives of her subjects into the world they inhabited and back again. . . . Wade distils half a century of social and literary history into these five women’s lives with a marvellously light touch. This is biography as fresh and engaging as you are likely to find."—Ariane Bankes, The Spectator