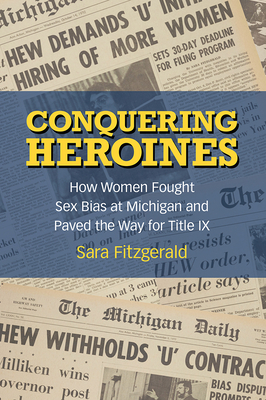 
On Our Shelves Now
In 1970, a group of women in Ann Arbor launched a crusade with an objective that seemed beyond reach at the time—force the University of Michigan to treat women the same as men. Sex discrimination was then rampant at U-M. The school’s admissions officials sought to maintain a ratio of 55:45 between male and female undergraduate entrants, turning away more qualified female applicants and arguing, among other things, that men needed help because they were less mature and posted lower grades. Women comprised less than seven percent of the University’s faculty members and their salaries trailed their male peers by substantial amounts. As one administrator put it when pressed about the disparity, “Men have better use for the extra money.”

Galvanized by their shared experiences with sex discrimination, the Ann Arbor women organized a group called FOCUS on Equal Employment for Women, led by activist Jean Ledwith King. Working with Bernice Sandler of the Women’s Equity Action League, they developed a strategy to unleash the power of another powerful institution—the federal government—to demand change at U-M and, they hoped, across the world of higher education. Prompted by a complaint filed by FOCUS, the U.S. Department of Health, Education, and Welfare soon documented egregious examples of discrimination in Michigan’s practices toward women and threatened to withhold millions of dollars in contracts unless the school adopted remedies. Among the hundreds of similar complaints filed against U.S. colleges in 1970–1971, the one brought by the Michigan women achieved the breakthrough that provided the historic template for settlements with other institutions.

Drawing on oral histories from archives as well as new interviews with living participants, Conquering Heroines chronicles this pivotal period in the histories of the University of Michigan and the women’s movement. An incredible story of grassroots activism and courageous women, the book highlights the kind of relentless effort that has helped make inclusivity an ongoing goal at U-M.

Sara Fitzgerald is a former editor and new-media developer for the Washington Post and was the first woman to serve as editor-in-chief of the Michigan Daily. She is the author of Elly Peterson: “Mother” of the Moderates (University of Michigan Press, 2012) and The Poet’s Girl (Thought Catalog Books, 2020). www.sarafitzgerald.com
"This is an excellent case study of a nation-wide problem."
—Senior Women Web, Jo Freeman, Feminist Scholar and author of We Will Be Heard
— Jo Freeman, Feminist Scholar