Sing to the Colors: A Writer Explores Two Centuries at the University of Michigan (Paperback) 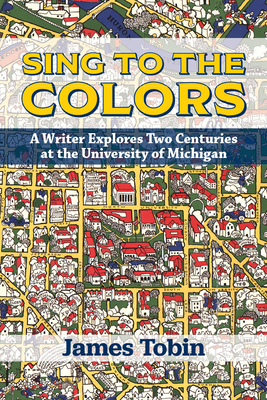 Sing to the Colors: A Writer Explores Two Centuries at the University of Michigan (Paperback)


On Our Shelves Now
In Sing to the Colors, award-winning author James Tobin considers ideas of place, tradition, legacy, and pride while investigating two centuries of history at his alma mater, the University of Michigan. The book’s 23 essays capture a series of moments—some well-known and celebrated, others inconspicuous or even troubling—that have contributed to the ongoing evolution of the University. Readers travel back to bitter battles fought over the vision for the University in its early years and learn how the Diag and other campus landmarks came to be. Other chapters consider milestones on the University’s continuing journey toward greater inclusivity such as the 1970 Black Action Movement strike and the enrollment of Michigan’s first female students in the 1870s. Still others illuminate the complex relationship between the University and the city of Ann Arbor, revisiting former mainstays like the Pretzel Bell and Drake’s Sandwich Shop. Alongside these stories, Tobin grapples with his own understanding of and connection to Michigan’s history, which—whatever its imperfections and errors—has shaped the lives of thousands of alumni around the world. This is a book for readers who not only cherish the University of Michigan but who also want to better understand the long work of the many generations who envisioned and built and sustained the place.
James Tobin teaches literary journalism and narrative history in the Department of Media, Journalism, and Film at Miami University in Oxford, OH. He earned his Ph.D. in history at the University of Michigan and worked for 12 years as a reporter for The Detroit News. He is author of several books, including Ernie Pyle’s War, which won the National Book Critics Circle Award.
"A fascinating look at sometimes overlooked parts of the university's history, it delves into a range of topics: the Negro-Caucasian Club that started in the 1920s, the 1970 Black Action Movement strike, Earth Day, even a fight by a student and professor against building Michigan Stadium in the mid 1920s....'Sing' also is an unflinching look at uncomfortable parts of the university's history at times."
—The Detroit News
— Maureen Feighan