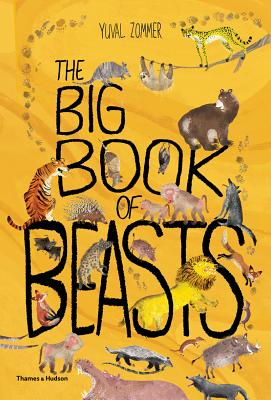 A beautifully illustrated, informative book for children introducing them to a fascinating cast of beasts

In The Big Book of Beasts Yuval Zommer’s wonderful illustrations bring to whimsical life some of the grizzliest, hairiest, bravest, wiliest, and most fearsome beasts in the animal kingdom. Brimming with interesting facts from beast consultant Barbara Taylor, this charming picture book is a beautiful way for parents to introduce young children to the animal world—and for older children to learn by themselves.

In the first pages children learn that beasts are wild animals that can’t be tamed and that they all defend themselves in different ways. As the book continues young readers meet specific beasts, including armadillos, bears, tigers, and the Tasmanian devil. The Big Book of Beasts also approaches the world of beasts thematically, looking at mythical beasts, Ice Age beasts, beasts on your street, and how to save beasts in danger of extinction.

The funny and conversational text, amazing facts, and glorious and quirky pictures will draw in young children over and over again.

Yuval Zommer is an author, illustrator, and environmentalist based in London. He studied at the Royal College of Art and worked for many years as a creative director at leading advertising agencies before becoming an author and illustrator. His award-winning Big Book series has been published in twenty-five languages and has over one million copies in print.

Barbara Taylor has worked as a science editor and writer at London’s Natural History Museum. She is an award-winning author and consultant for over one hundred children’s books.
[Yuval] Zommer follows The Big Book of Bugs with a book that focuses on wild mammals. Questions introduce each spread, which discuss specific mammals and more general topics, such as animal footprints, endangered creatures, and animals in urban habitats. Zommer illustrates with playful detail in scenes that have a folk-art flair.

An overview of some of the more popular creatures… The illustrations are vibrant and whimsical, and the animals’ facial expressions are bound to elicit laughs.
— School Library Journal