Autopsy of a Crime Lab: Exposing the Flaws in Forensics (Paperback) 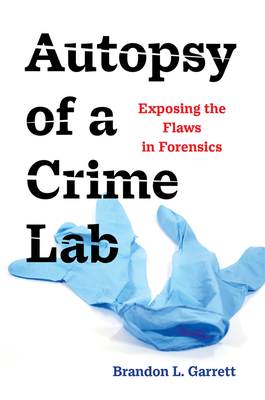 Autopsy of a Crime Lab: Exposing the Flaws in Forensics (Paperback)

This book exposes the dangerously imperfect forensic evidence that we rely on for criminal convictions.

"That's not my fingerprint, your honor," said the defendant, after FBI experts reported a "100-percent identification." The FBI was wrong. It is shocking how often they are. Autopsy of a Crime Lab is the first book to catalog the sources of error and the faulty science behind a range of well-known forensic evidence, from fingerprints and firearms to forensic algorithms. In this devastating forensic takedown, noted legal expert Brandon L. Garrett poses the questions that should be asked in courtrooms every day: Where are the studies that validate the basic premises of widely accepted techniques such as fingerprinting? How can experts testify with 100-percent certainty about a fingerprint, when there is no such thing as a 100 percent match? Where is the quality control at the crime scenes and in the laboratories? Should we so readily adopt powerful new technologies like facial recognition software and rapid DNA machines? And why have judges been so reluctant to consider the weaknesses of so many long-accepted methods?

Taking us into the lives of the wrongfully convicted or nearly convicted, into crime labs rocked by scandal, and onto the front lines of promising reform efforts driven by professionals and researchers alike, Autopsy of a Crime Lab illustrates the persistence and perniciousness of shaky science and its well-meaning practitioners.

Brandon L. Garrett is the L. Neil Williams Professor of Law at Duke University School of Law, where he directs the Wilson Center for Science and Justice. His previous books include Convicting the Innocent: Where Criminal Prosecutions Go Wrong, Too Big to Jail: How Prosecutors Compromise with Corporations, and End of Its Rope: How Killing the Death Penalty Can Revive Criminal Justice.

“Autopsy of a Crime Lab forcefully reminds us that despite what we see on CSI, even airtight evidence must first be interpreted by boastful and fallible humans.”
— Vanity Fair

"Garrett shatters illusions that forensics are always scientifically accurate, and that experts brought in to testify always know their subject. Autopsy of a Crime Lab provides resources to move forward and fix forensics, to ensure that human and scientific errors are kept to a minimum."

"Autopsy of a Crime Lab argues that judges should take their responsibility as gatekeepers of scientific and technical evidence more seriously."
— Reason

“Autopsy of a Crime Lab offers in its form as well as its content a convincing argument against the current state of forensic science, as well as promising solutions for the way forward. This book would be an excellent resource for academics but would also be a great starting point for anyone who wants to learn more about the problems inherent within forensics.”
— True Crime Index

"In Autopsy of a Crime Lab, Brandon Garrett has produced the best overview for a general audience to date of the legal-scientific problems at the heart of this controversy."
— Law & Society Review

"Autopsy of a Crime Lab is an important first step in bringing the forensic system 'back to life' by tackling both the science itself, and how it should be understood and implemented in the criminal-legal system."

"This book is a must-read for any person involved in justice at any level. Failure to understand the basic science behind forensics is to court miscarriage of justice on a grand scale. Judges and lawyers would be well advised to read this book and to keep it close at hand."
— South Africa Law Review