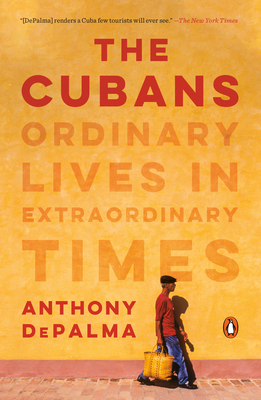 
On Our Shelves Now
"[DePalma] renders a Cuba few tourists will ever see . . . You won't forget these people soon, and you are bound to emerge from DePalma's bighearted account with a deeper understanding of a storied island . . . A remarkably revealing glimpse into the world of a muzzled yet irrepressibly ebullient neighbor."--The New York Times

Modern Cuba comes alive in a vibrant portrait of a group of families's varied journeys in one community over the last twenty years.

Cubans today, most of whom have lived their entire lives under the Castro regime, are hesitantly embracing the future. In his new book, Anthony DePalma, a veteran reporter with years of experience in Cuba, focuses on a neighborhood across the harbor from Old Havana to dramatize the optimism as well as the enormous challenges that Cubans face: a moving snapshot of Cuba with all its contradictions as the new regime opens the gate to the capitalism that Fidel railed against for so long.

In Guanabacoa, longtime residents prove enterprising in the extreme. Scrounging materials in the black market, Cary Luisa Limonta Ewen has started her own small manufacturing business, a surprising turn for a former ranking member of the Communist Party. Her good friend Lili, a loyal Communist, heads the neighborhood's watchdog revolutionary committee. Artist Arturo Montoto, who had long lived and worked in Mexico, moved back to Cuba when he saw improving conditions but complains like any artist about recognition. In stark contrast, Jorge García lives in Miami and continues to seek justice for the sinking of a tugboat full of refugees, a tragedy that claimed the lives of his son, grandson, and twelve other family members, a massacre for which the government denies any role. In The Cubans, many patriots face one new question: is their loyalty to the revolution, or to their country?

As people try to navigate their new reality, Cuba has become an improvised country, an old machine kept running with equal measures of ingenuity and desperation. A new kind of revolutionary spirit thrives beneath the conformity of a half century of totalitarian rule. And over all of this looms the United States, with its unpredictable policies, which warmed towards its neighbor under one administration but whose policies have now taken on a chill reminiscent of the Cold War.
Anthony DePalma is the author of The Man Who Invented Fidel and Here: A Biography of the New American Continent. He was a foreign correspondent for The New York Times focusing on Latin America for twenty-two years, and continues to write for the newspaper as well as other publications.
“[A] remarkable book . . . DePalma anchors all of the historical touchpoints in the powerful stories of the people we meet . . . Cary, Lili, Jorge, and the others have risked a great deal to share their stories. Flipping through the many dog-eared pages of my copy of this book, I wondered: What was in it for them? I decided, finally, that they simply wanted to be heard. They wanted readers to know that they may have traveled different paths through post-revolutionary society, but they continue to confront their challenges the same way—with pride, ingenuity and strength, and they remain resolutely Cuban."—The Wall Street Journal

"DePalma vividly depicts the lives of several families in modern Cuba. DePalma’s writing is evocative and detailed, and the reader feels as though they are walking alongside the people whose aspirations and dreams he so poignantly highlights. The country comes alive with each sentence, and the end result is an homage to Cuba and the Cuban people that is both heartbreaking and hopeful."—The Washington Post

"In his thoroughly researched and reported book, replete with human detail and probing insight, [DePalma] renders a Cuba few tourists will ever see . . . You won’t forget these people soon, and you are bound to emerge from DePalma’s bighearted account with a deeper understanding of a storied island . . . A remarkably revealing glimpse into the world of a muzzled yet irrepressibly ebullient neighbor."—The New York Times

"In this beautifully crafted work of reportage . . . DePalma takes the reader on a tour of the glorious triumphs and ardent idealism of the early days of the Cuban Revolution, the dark years of the post-Soviet economic collapse, the revived hopes occasioned by the thaw of U.S.-Cuban relations under U.S. President Barack Obama, and now the seemingly endless days of deprivation."—Foreign Affairs

"DePalma tells the vivid story of communism through the eyes of several generations of Cubans. He includes telling details, such as the pantomime of stroking imaginary beards before criticizing the government, to avoid retribution for mentioning Castro’s name. DePalma shows what life was like, and is like, for Cubans."—The Christian Science Monitor, "The 10 best books of June"

“For all that’s been written about revolutionary Cuba, I know of no book that more vividly describes the interior of the contemporary Cuban experience. The ordinary people who share their struggles with Anthony DePalma have seen the “bright promise” of revolution give way to the “dingy hardship” of real life. DePalma strips the Cuba story of its shabby ideological pretensions, but beneath the surface finds Cubans who still care for each other and whose resilience defines a patriotism all its own.”—Tom Gjelten, author of Bacardi and the Long Fight for Cuba

"An unvarnished look at revolutionary Cuba . . . The Cubans doesn’t dwell much on Fidel and Raúl Castro . . . Instead, it is about resilient and resourceful individuals who seem to innately know from birth how to “resolver”—creatively resolve their predicaments—to survive. The individuals DePalma writes about are not ordinary at all, but complex, three-dimensional people, drawn with a nuanced and empathetic hand."—ReVista, Harvard Review of Latin America

"This elegantly written chronicle of the intertwined lives of five average Cubans and their families gives an unofficial, and thus potentially truer, account of the challenges for people who, DePalma writes, have an “excess of prohibitions and a minimum of inhibitions.”—New Jersey Monthly

“DePalma’s fictionlike narrative moves thematically (Realization, Reconciliation, etc.), and the author is especially good at revealing the stunning adaptability of a people thwarted at seemingly every turn. An obvious labor of love, years in the making, featuring meticulous research and an elegant narrative style.” —Kirkus Reviews (*starred review*)

"A rich, intimate, evenhanded narrative that reveals the Cuban people’s resilience and resourcefulness amid oppression."—Library Journal

“A sensitive portrait… In impressively specific detail, DePalma captures the suffering and resilience of ordinary Cubans caught between the political posturing of their government and the U.S. Readers will savor this intimate, eye-opening account.”—Publishers Weekly

“Finally, a book not about Fidel, Raúl, or Ché Guevara, but about Cary, Pipo, Oscar, and other ordinary Cubans who tell not the history we have been fed for years but the real, remarkable, and complicated stories of people living with what Anthony DePalma aptly describes as the ‘interminable revolution.’ DePalma has surely become the best chronicler of Cuba today.” —Mirta Ojito, author of Finding Mañana: A Memoir of a Cuban Exodus

“Amid all the overnight experts on Cuba who rarely venture beyond Havana, Anthony DePalma stands apart, offering a profound and eloquent book that is destined to become a classic. With his astute journalist’s eye and an open heart, DePalma earned the trust of cubanas and cubanos as few outsiders have. An essential testimony as Cuba moves into an uncertain future.”—Ruth Behar, author of An Island Called Home: Returning to Jewish Cuba

“An extraordinary and poignant portrait of Cuban identity and the lives of a compelling group of people living in modern Cuba, Anthony DePalma’s The Cubans is a masterpiece. DePalma beautifully and powerfully illustrates what it means to be Cuban while transporting readers to walk the streets of Guanabacoa where residents are constantly forced to navigate an ever-changing harsh reality. Heartbreaking, hopeful, and vividly rendered, this is an intimate and eye-opening must-read for anyone interested in Cuba.”—Chanel Cleeton, author of Next Year in Havana

"Indispensable for anyone trying to understand the warmth, spirit and 'national insanity' of the Cuban people and all they have been through over the last 60 years. It reads like a historical novel, with compelling characters, hurricanes and the murder of children on the open seas. But this balanced, non-ideological and meticulously-reported story is all true.”—Jonathan Alter, author of The Center Holds: Obama and His Enemies

“If you want to know what the real Cuba is like for its natives—as opposed to the synthetic Cuba experienced by most tourists—this book will take you there, to that unique labyrinth of ruins where truth is as elusive as comfort or the bare necessities of life.  Unflinchingly objective, yet suffused with poetic empathy for the complex characters whose lives it chronicles, Anthony DePalma’s narrative reads like the best of novels.  Uplifting and devastating at the same time.”—Carlos Eire, author of Waiting for Snow in Havana

"Forget the travel books that guide your wanderlust to the best mojito bars and cigar shops in Cuba. Forget the academic history tomes that leave you heartlessly informed. Forget the coffee table books of glossy photos that vicariously play on your romantic notion of Havana’s ruins. Forget the media that polarizes your perception of the island through an anachronistic liberal or conservative lens. If you honestly want to feel Cuba—not just understand it—then read The Cubans. Finally, a book that demystifies Cuba through the brilliance of DePalma, who knows that a nation is merely an idea subject to infinite abstraction, until it is grounded in the lives of its people and their rich and varied stories that are sadly—and almost inevitably—lost in the crosshairs of ideology and crossfire of power. With the eye of a poet, the perceptiveness of an ethnographer, and the heart of an emotional historian, DePalma renders Cuba through the spirit of Cubans as they have always been, as they are now, and as they will always be, regardless."—Richard Blanco, Presidential Inaugural Poet, author of How to Love a Country