Ginny Goblin Cannot Have a Monster for a Pet (Hardcover) 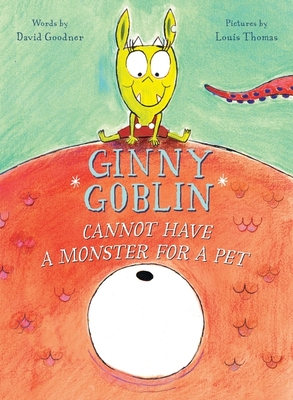 Ginny Goblin Cannot Have a Monster for a Pet (Hardcover)


On Our Shelves Now
Ginny Goblin may be a monster, but she CANNOT have a monster for a pet in this action-packed, laugh-out-loud adventure perfect for fans of Jon Klassen, Peter Brown, and Vera Brogsol.

Perhaps a pet will teach clever Ginny Goblin some responsibility. Fish make good pets. So do hermit crabs. Ginny does NOT need a giant net or bear trap or army tank to catch a pet. But will Ginny Goblin get her way? Besides, isn’t a monster a perfect pet for a goblin?

In this funny follow-up to Ginny Goblin Is Not Allowed to Open This Box, one thing is for certain: Ginny Goblin always has a plan.
David Goodner lives in North Texas. He has an adoring wife and two tolerating cats. He works in a library where he gets to see all the new books before anybody else. When he’s not working or writing stories he likes to play role-playing games, make stuff, and read other people’s books (mostly science fiction and fantasy, but really if you leave a book out where David can find it, he’ll read it).

Louis Thomas graduated from Gobelins/Paris and Calarts/Los Angeles in 2012. After working in animation studios in California, he moved to France where he lives with his cat Pipo in his art studio between the Pantheon and the Luxembourg Garden. He is the author/illustrator of the book HUG IT OUT. Visit him at louist.blogspot.com and on Instagram @Louis_Thomas_Draw.
★ "The art perfectly complements the imaginative, absurd text....Ginny is becoming a symbol of toddler power."—Kirkus, STARRED review

"Thomas’s colorful illustrations are packed with personality. Ginny stands out on every page....this title is sure to please children whether or not they want a pet of their own. Readers will find Ginny’s adventures and the tone of the text a hoot."—School Library Journal