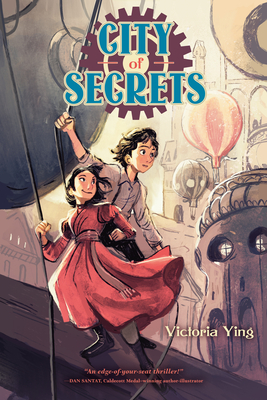 Ever Barnes is a shy orphan guarding a secret in an amazing puzzle box of a building.

Most of the young women who work at the building's Switchboard Operating Facility, which connects the whole city of Oskar, look the other way as Ever roams around in the shadows. But one of them, Lisa, keeps an eye on the boy. So does the head of the Switchboard, Madame Alexander . . . a rather sharp eye.

Enter Hannah, the spunky daughter of the building's owner. She thinks Ever needs a friend, even if he doesn't know it yet.

Good thing she does!

Lisa and Madame Alexander are each clearly up to something.

Ever is beset by a menacing band of rogues looking to unlock the secret he holds--at any cost.

And whatever is hidden deep in the Switchboard building will determine all of their futures.

On a journey that twists and turns as much as the mechanical building Ever Barnes calls home, he and his new friend Hannah have to ­ and out what's really going on in this mysterious city of secrets . . . or else!
Raised in California, Victoria Ying is an author and illustrator of beloved children's books. She realized that she had a true eye for detail when she fell in loves with comic books when she was a teenager. This interest in comics led her to a successful career in animation. Her credits include Tangled, Wreck it Ralph, Frozen, Paperman, Big Hero 6, and Moana.
Praise for City of Secrets by Victoria Ying:

"A unique Ghibli-esque city that reveals some of its many mysteries through an action-packed adventure." —Molly Knox Ostertag, author-illustrator of the Witch Boy trilogy

"Never a dull moment! City of Secrets is a wonderful world full of twists and turns, surprises and intrigue." —Amy Chu, author of Sea Sirens, Sky Island, the Ana and the Cosmic Race series, and the Poison Ivy: Cycle of Life and Death series

"Victoria Ying’s lively and spirited art takes young readers by the hand and plunges them into a steampunk fantasy world."  —Wendy Xu, co-creator of Mooncakes

"A delightful adventure set in an imaginative world built on gears, pistons, and brass . . . City of Secrets captivates the heart and imagination!" —Armand Baltazar, author-illustrator of Timeless: Diego and the Rangers of the Vastlantic