The Worm Family Has Its Picture Taken (Hardcover) 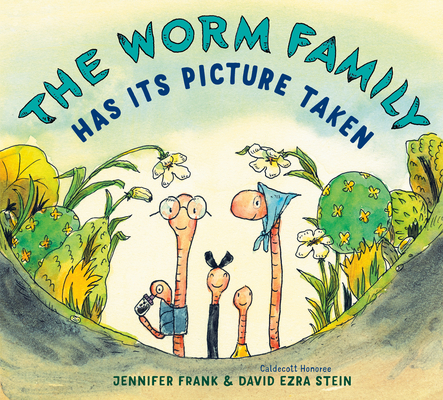 The Worm Family Has Its Picture Taken (Hardcover)


On Our Shelves Now
Worms don't take good family photos, do they? Find out in this hilarious picture book from a Caldecott Honor illustrator and debut author about a young worm who comes to appreciate her very unusual family for who they are.

Emma is excited for her worm family to have their portrait taken. But when she sees her other friends' portraits, she gets discouraged. "We had the most beautiful smiles," Ellie the Chipmunk squeals. Abigail the Cat meows, "I looked gorgeous with my big poufy hair." The worm family doesn't have teeth...how will they show their beautiful smiles? They don't have hair either...how can it look big and poufy?! So Emma gathers wigs, giant fake teeth, and colorful clothing for her parents and sisters.

But it's only after taking off their costumes that the worm family is able to wriggle and squiggle and squeeze into a delightful pose that only a worm family can make. And Emma? She thinks it's perfectly perfect.
Jennifer Frank has been a member of SCBWI for ten years. Before writing children's books, Jennifer was a family coordinator at the Boston Children's Hospital. She lives with her husband and three daughters outside of Boston. THE WORM FAMILY HAS ITS PICTURE TAKEN is her debut.

David Ezra Stein is the Caldecott Honor illustrator and author of INTERRUPTING CHICKEN and its sequel, INTERRUPTING CHICKEN AND THE ELEPHANT OF SURPRISE, which the Wall Street Journal called "a celebration of love and language." The next in the series, INTERRUPTING CHICKEN, COOKIES FOR BREAKFAST, will publish in Fall 2021. David is also the creator of DINOSAUR KISSES, I'M MY OWN DOG, and many other award-winning picture books. His picture book LEAVES won the Ezra Jack Keats New Writer Award and was a Publishers Weekly Best Book of the Year, a Kirkus Reviews Editor's Choice, and a School Library Journal Best Book. He lives in New York. Visit David at davidezrastein.com.
"Sure to worm its way into readers’ hearts." —Kirkus Reviews, starred review

“A terrific pairing of new and veteran talent, as well as a gentle but firm nudge for any child who’s felt the pang of familial embarrassment.” —Publishers Weekly

“Stein’s worms could be cousins to Richard Scarry’s, with guileless facial expressions and simple, personality-enriching accessories. The earth(worm)-toned mixed-media illustrations have lots of adorable detail (watch Baby Worm). The text has kid-appeal (“Cool,” is Emma’s signature understated response), and the situations are relatable for young people longing to stand out from the crowd.” —The Horn Book