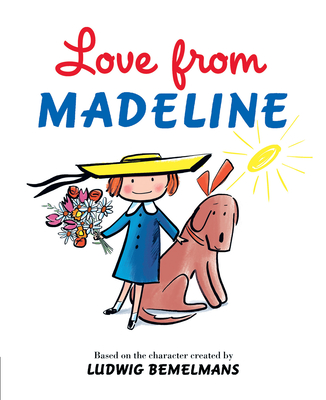 
On Our Shelves Now
In the same mini-hardcover format as Love from the Very Hungry Caterpillar and Love from the Crayons comes another love-themed book starring one of our bestselling characters--Madeline.

It's the Valentine's Day season and Madeline is ready to show the world what love means to her. From being brave to being kind, love takes all kinds of shapes and sizes. And there are many ways to express that love--whether it's lending a hand, standing tall, or spreading sunshine. This mini-hardcover features all-new art--but that doesn't mean we won't be seeing a familiar scene or two. This gifty format is perfect for Valentine's Day or a birthday, or a gift to show someone you care.
Ludwig Bemelmans was a painter, illustrator, and writer for both children and adults. A world traveler, he spent most of his time in New York City or Paris. The original inspiration for Madeline was the result of his bicycle accident on an island of France. Hospitalized after being hit by the only car on the island, Mr. Bemelmans recalled, “The sisters in that small hospital wore large, starched white hats that looked like the wings of a giant butterfly. In the room next to mine was a little girl who had had her appendix out. In the ceiling over my bed was a crack ‘that had the habit of sometimes looking like a rabbit.’” A year later, back in New York City, he penned the first draft of Madeline on the backs of menus in Pete’s Tavern. The Madeline books rank among the most-honored children’s books series. Madeline was named a Caldecott Honor Book and the first of its five sequels, Madeline’s Rescue, won the Caldecott Medal and was a New York Times Outstanding Book of the Year. Mr. Bemelmans died in 1962, after completing Madeline’s Christmas.

STEVEN SALERNO is the author/illustrator of 5 picture books: Coco the Carrot, Little Tumbo, Harry Hungry!, Wild Child, and Tim’s Goodbye. Steven has also illustrated 24 popular picture books for other authors, including, Brothers at Bat (a New York Times Book Review's Notable Picture Book of the Year), The Kid from Diamond, The Fantastic Ferris Wheel, Goldenlocks and the Three Pirates, 19 Girls and Me, Margaret Wise Brown’s The Dirty Little Boy, Mrs. Wow never Wanted a Cow, and The Puppy Princess. Steven’s illustrations also appear in advertising, magazines, product packaging, and retail graphics. A graduate of Parson School of Design in NYC, he lives and works in Manhattan. Visit him at stevensalerno.com