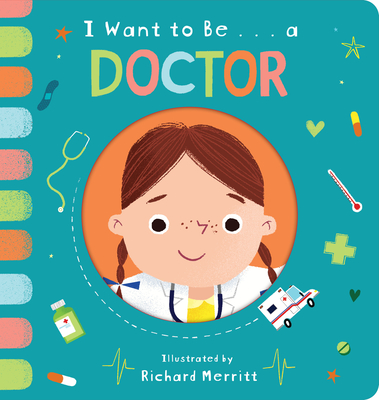 
On Our Shelves Now
Do you want to be a doctor? Find out what it's like to help people feel better in this inspiring board book that features a peek-through cover and surprise mirror ending!

This fourth book in the I Want to Be... series invites curious little ones to imagine themselves as doctors, from putting on a doctor's outfit and riding in an ambulance to using a stethoscope and X-ray machine to help their patients. Its positive tone and reassuring message can help ease anxiety around a child's first trip to the doctor, and the surprise mirror at the end provides a fun, interactive bonus!
Becky Davies is a children's book editor and sometimes author from the South West of England. Her favorite things are animals, books about magic, and anything sparkly. In a parallel universe she lives in Hawaii, where she works in a dog sanctuary and surfs until the sun sets beyond the horizon.

Richard Merritt has published over 70 children's books. His body of work spans a broad section of the illustration world, from editorial, packaging design, games and education, to children's publishing, cover design, fashion and costume drawing for Hollywood blockbuster films such as Lincoln, Jack The Giant Slayer, Disney's The BFG, and The Witches. Formerly an agent, he now illustrates full-time from his home in London, England. Find out more about Richard at richard-merritt.com.