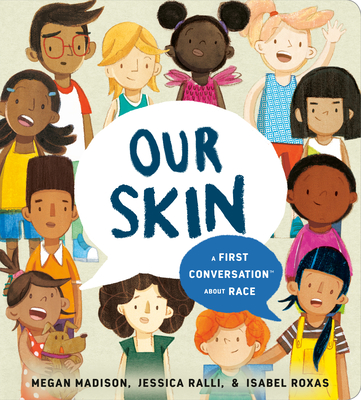 
Usually Available in 2-5 Days
Based on the research that race, gender, consent, and body positivity should be discussed with toddlers on up, this read-aloud board book series offers adults the opportunity to begin important conversations with young children in an informed, safe, and supported way.

Developed by experts in the fields of early childhood and activism against injustice, this topic-driven board book offers clear, concrete language and beautiful imagery that young children can grasp and adults can leverage for further discussion.

While young children are avid observers and questioners of their world, adults often shut down or postpone conversations on complicated topics because it's hard to know where to begin. Research shows that talking about issues like race and gender from the age of two not only helps children understand what they see, but also increases self-awareness, self-esteem, and allows them to recognize and confront things that are unfair, like discrimination and prejudice.

This first book in the series begins the conversation on race, with a supportive approach that considers both the child and the adult. Stunning art accompanies the simple and interactive text, and the backmatter offers additional resources and ideas for extending this discussion.
Jessica Ralli is the Coordinator of Early Literacy Programs at Brooklyn Public Library, where she develops and manages programming for BPL's award-winning First Five Years initiative. She received her MA in Early Childhood Special Education from Teachers College, Columbia University, and previously taught in schools, childcare centers, and museums. She has written about early literacy and library services for young children in School Library Journal (where she co-authors the "First Steps" column with Rachel G. Payne) and has presented on play-based learning at the American Library Association Conference, Young Child Expo, and the Bank Street Center for Children's Literature.
Megan Pamela Ruth Madison is a lifelong student of radical Black feminism and an early childhood educator. She holds an MS in early childhood education from Dominican University and a BA in studies in religion from the University of Michigan. She is currently pursuing her PhD at Brandeis University's Heller School for Social Policy. When she's not working on finishing up her dissertation, she works as a trainer for the Center for Racial Justice in Education, the Human Root, and the New York Early Childhood Professional Development Institute, facilitating workshops for teachers on race, gender, and sexuality.

Isabel Roxas is an author/illustrator, micro-publisher, ceramicist, and avid reader. She was born in Manila, Philippines, and was raised on luscious mangoes, old wives' tales, and monsoon moons. She now works in the backroom of an art gallery in Manhattan where she writes and illustrates stories, designs books, and creates small objects in clay and resin. Her illustrator credits include picture books Hello Universe by Erin Entrada Kelly (2018 Newbery medal winner), Let Me Finish! by Minh Lê (named an NPR Best Book of 2016) and Day at the Market by May Tobias-Papa (2010 winner of the Philippine National Book Award).

Isabel is the founder of Little Big Time Press, where she publishes artist books and zines for children. She is also a frequent contributor to Babybug and Ladybug Magazine. Her work has been recognized by American Illustration, HOW Magazine, and 3x3 Magazine of Contemporary Illustration. Her debut comic book for young readers, The Adventures of Team Pom: SQUID HAPPENS, will publish in June 2021.

Follow her on Twitter @studioroxas and Instagram @studioroxas.
“This accessibly written, adroit primer prompts the youngest readers to consider how skin tone relates to race and ethnicity, societal treatment, and justice. An ideal conversation starter for any child.” – Publishers Weekly (STARRED REVIEW)


“This timely book is essential for all collections.” – School Library Connection (STARRED REVIEW)


"Children and adults can come together over this book, which takes apart the meanings of race and skin color at the foundational level. It’s a stepping stone on the path to understanding what it means to be human, with cheerful art and easy language." --School Library Journal (STARRED REVIEW)


“[This] is the book we’ve been waiting for! Ralli, Madison, and Roxas did an incredible thing: they explained race and racism to young children, [and] also provided guidance to the adults who will read it to children.” – Social Justice Books


“If there were ever a concept that was difficult to break down into terms accessible to young children, it is the concept of race, so adults will welcome Our Skin for its ability to just that.” –Booklist


“Introducing concepts such as race and gender to children as young as two invites them to begin developing their own questions and thoughts about those concepts, allowing them to start having these conversations early.”—The Root