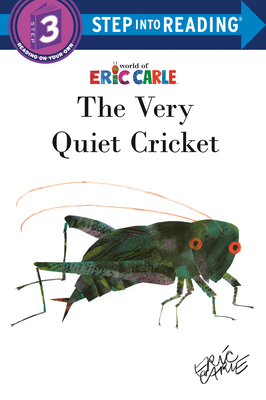 
On Our Shelves Now
Eric Carle's classic story of finding your "voice" is newly joining the premier reader line, Step into Reading!

One day, a little cricket is born and meets a big cricket who chirps his welcome. But the little cricket cannot make a sound. The cricket meets many insects, but it isn't until he meets a beautiful female cricket that he can finally chirp "hello!"

Step 3 Readers feature engaging characters in easy-to-follow plots about popular topics; for children who are ready to read on their own.
Born in the United States, Eric Carle was taken as a six-year-old child by his parents back to their native country, Germany. Later, he studied at the Akademie der Bildenden Künste (Academy of Applied Arts) in Stuttgart, and returned to New York in his early twenties as a graphic designer and artist. His many picture books are now known and loved by children around the world.

In 2002, Eric and his late wife, Barbara, opened The Eric Carle Museum of Picture Book Art, in Amherst, Massachusetts, where the works of distinguished picture book artists, nationally and internationally acclaimed, are exhibited in three spacious galleries.