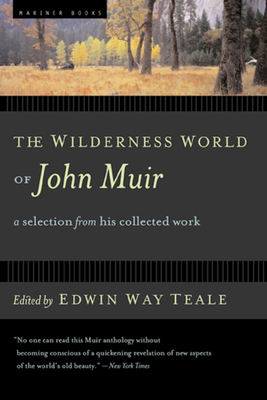 
Usually Available in 2-5 Days
John Muir's extraordinary vision of America comes to life in these fascinating selections from his personal journals.
As a conservationist, John Muir traveled through most of the American wilderness alone and on foot, without a gun or a sleeping bag. In 1903, while on a three-day camping trip with President Theodore Roosevelt, he convinced the president of the importance of a national conservation program, and he is widely recognized for saving the Grand Canyon and Arizona's Petrified Forest.
Muir's writing, based on journals he kept throughout his life, gives a view of the American landscape before it was largely settled by farms and towns. In The Wildernesss World of John Muir, Edwin Way Teale has selected the best of Muir's writing from all of his major works — including My First Summer in the Sierra and Travels in Alaska — to provide a singular collection that provides to be "magnificent, thrilling, exciting, breathtaking, and awe-inspiring" (Kirkus Reviews).
Edwin Way Teale (1899-1980) was an environmental writer and photographer best known for his four-book series, The American Seasons.

John Muir (1838-1914) was one of the most influential conservationists and nature writers in American history. He was instrumental in the creation and passage of the National Parks Act, and founder of the Sierra Club, acting as its president until his death. Muir was a spirit so free that all he did to prepare for an expedition was to "throw some tea and bread into an old sack and jump the back fence."

"This admiringly edited volume is especially welcome... Here is a substantial selection including may of his greatest passages." The Nation —