Baking: From My Home to Yours (Hardcover) 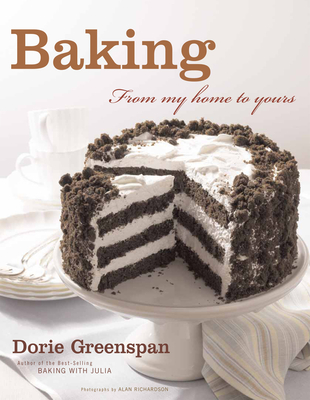 Baking: From My Home to Yours (Hardcover)


On Our Shelves Now
Dorie Greenspan has written recipes for the most eminent chefs in the world: Pierre Hermé, Daniel Boulud, and arguably the greatest of them all, Julia Child, who once told Dorie, “You write recipes just the way I do.” Her recipe writing has won widespread praise for its literate curiosity and “patient but exuberant style.” (One hard-boiled critic called it “a joy forever.”) In Baking: From My Home to Yours, her masterwork, Dorie applies the lessons from three decades of experience to her first and real love: home baking. The 300 recipes will seduce a new generation of bakers, whether their favorite kitchen tools are a bowl and a whisk or a stand mixer and a baker’s torch.

Even the most homey of the recipes are very special. Dorie’s favorite raisin swirl bread. Big spicy muffins from her stint as a baker in a famous New York City restaurant. French chocolate brownies (a Parisian pastry chef begged for the recipe). A dramatic black and white cake for a “wow” occasion. Pierre Hermé’s extraordinary lemon tart.
The generous helpings of background information, abundant stories, and hundreds of professional hints set Baking apart as a one-of-a-kind cookbook. And as if all of this weren’t more than enough, Dorie has appended a fascinating minibook, A Dessertmaker’s Glossary, with more than 100 entries, from why using one’s fingers is often best, to how to buy the finest butter, to how the bundt pan got its name.
Inducted into the James Beard Foundation’s Who’s Who of Food and Beverage in America, DORIE GREENSPAN is the author of 14 cookbooks, including Baking with Dorie; Dorie's Cookies, a 2017 James Beard Award-winner for Best Baking and Dessert book; Around My French Table, a New York Times bestseller that wasnamed Cookbook of the Year by the IACP; Baking Chez Moi, also a Times bestseller; and Baking: From My Home to Yours, a James Beard Award winner. She lives in New York City, Westbrook, Connecticut, and Paris.