To Conquer the Air: The Wright Brothers and the Great Race for Flight (Paperback) 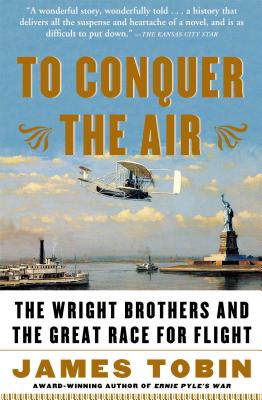 To Conquer the Air: The Wright Brothers and the Great Race for Flight (Paperback)


Usually Available in 2-5 Days
James Tobin, award-winning author of Ernie Pyle's War and The Man He Became, has penned the definitive account of the inspiring and impassioned race between the Wright brothers and their primary rival Samuel Langley across ten years and two continents to conquer the air.

For years, Wilbur Wright and his younger brother, Orville, experimented in obscurity, supported only by their exceptional family. Meanwhile, the world watched as Samuel Langley, armed with a contract from the US War Department and all the resources of the Smithsonian Institution, sought to create the first manned flying machine. But while Langley saw flight as a problem of power, the Wrights saw a problem of balance. Thus their machines took two very different paths—Langley’s toward oblivion, the Wrights’ toward the heavens—though not before facing countless other obstacles. With a historian’s accuracy and a novelist’s eye, Tobin has captured an extraordinary moment in history. To Conquer the Air is itself a heroic achievement.
James Tobin won the National Book Critics Circle Award in biography for Ernie Pyle’s War and the J. Anthony Lukas Work-in-Progress Award for To Conquer the Air: The Wright Brothers and the Great Race for Flight. Educated at the University of Michigan, where he earned a PhD in history, he teaches narrative nonfiction in the Department of Media, Journalism, and Film at Miami University in Oxford, OH.
Chicago Sun-Times Tobin is interested as much in the personalities of Orville and Wilbur Wright as he is in the technical aspects of their feat. And he outlines their lives with style and brio.

The Seattle Times Fabulous...fascinating...A tale about the triumph of sweat and labor over might and money. It's hard to think of a better book to bring next time one climbs aboard an airplane.