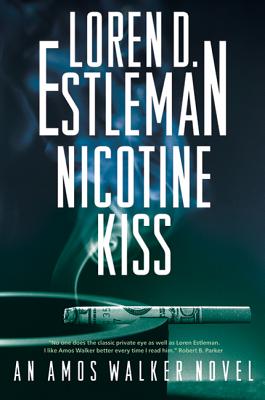 This is book number 18 in the Amos Walker Novels series.

In this installment of Loren Estleman's signature PI series, Amos Walker, the quintessential hard-boiled detective, proves that he's mortal after all. Jeff Starzek, an old friend who smuggles cigarettes for a living, saves Walker's life, getting him to the hospital after he's taken a bullet in the leg. A month later, still convalescing, Walker gets a panicked phone call from Starzek's sister. Jeff is missing. One of the few leads is a Homeland Security agent who's after Starzek, in connection with a counterfeiting operation that may have terrorist ties.

Though Walker doubts Starzek is a terrorist, he finds treasury paper at a church run by Starzek's brother. Then Starzek's brother disappears too. Back to square one, Walker follows his best hunch, driving Starzek's usual cigarette route along the Lake Huron shore, and finally gets a solid lead on the paper hangers. But before Walker can break the case, someone tries to shoot him—and he's accused of murder. Walker will need all of his intestinal fortitude, injured leg notwithstanding, to stay alive long enough to figure out who's doing what to whom, in time to save his friend, in Nicotine Kiss.

“No one comes closer to capturing the spirit of the noir master [Raymond Chandler's] work than Estleman.” —Associated Press

“Estleman delivers gripping action and satisfying irony, further cementing the solitary, hard-boiled P.I.'s reputation for giving as good as he gets. The riveting chase scenes are tailor-made for the screen. ” —Booklist