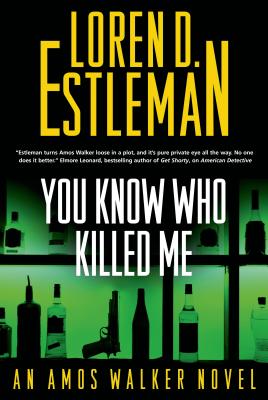 This is book number 24 in the Amos Walker Novels series.

In You Know Who Killed Me, by multiple award-winning author Loren D. Estleman, Amos Walker is at low ebb. Just released from a rehab clinic, the Detroit private detective has to marshal his energies to help solve a murder in Iroquois Heights, his least favorite town.

The area is flooded with billboards rented by the widow of Donald Gates, an ordinary suburbanite found shot to death in his basement on New Year's Eve: "YOU KNOW WHO KILLED ME!" they read, above the number of the sheriff's tip line. Complicating matters is a $10,000 reward for information leading to the arrest and conviction of the murderer, offered by an anonymous donor through the dead man's place of worship.

Shadowed by government operatives, at odds with the sheriff, and struggling with his addiction, Walker soldiers on, in spite of bodies piling up and the fact that almost everyone involved with the case is lying to him.

Loren D. Estleman is the author of more than fifty novels, including the Amos Walker, Page Murdock, and Peter Macklin series. Winner of three Shamus Awards, three Western Heritage Awards, four Spur Awards and many other literary prizes. He lives outside Detroit with his wife, author Deborah Morgan.

“Amos Walker, the throwback private eye who operates out of Detroit in Loren D. Estleman's hard-boiled mysteries, is a lot like the old Cutlass he drives. The guy may look beat up, but under the hood he's a clean machine.” —The New York Times Book Review