The New Father: A Dad's Guide to the First Year (Paperback) 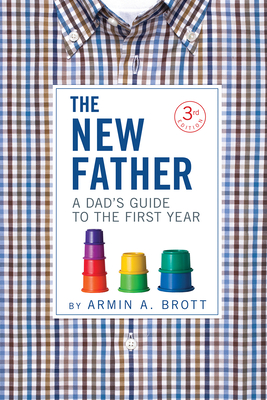 
The essential handbook for all things first-year father is now fully updated and revised. Not only will new dads get a month-by-month guide to their baby's development, men reading The New Father will learn how they change, grow, and develop over the first twelve months of fatherhood.

In each chapter, Brott focuses on What's Going On with the Baby; What You're Going Through; What's Going On with Your Partner; You and Your Baby; Family Matters; and more. The latest research, as well as time-honored wisdom--and humor, thanks to New Yorker cartoons and Brott's light touch--make The New Father indispensible for the modern father who doesn't want to miss a moment of his child's first year.

What's new?
? How technology is changing fatherhood
? Changing definitions of fatherhood
? Changes in the way society deals with dads?from changing tables in public men's rooms to workplace flexibility
? Research proving that a father's love is just as important as a mother's
? How being an involved dad rewires a man's brain
? How changes in women's roles in the family affect dads and their roles
? Special concerns for: young dads, older dads, at-home dads, unmarried dads, dads in same-sex couples, dads in blended families, dads of kids with special needs, and men who became dads with the help of technology
? The special impact dads have on girls and boys
? Specific strategies dads can use to get?and stay?involved in their children's lives
? Updated resources for new fathers

Not to mention new research and information on:
? How to understand what your baby is telling you
? Babies' amazing abilities
? Baby massage--they love it
? The latest on vaccinations and healthcare
? And much, much more.

Armin A. Brott has devoted the last 15 years to providing men with the tools, support, and knowledge to help them become the fathers they want to be----and their families need them to be. His seven critically acclaimed books for fathers have sold well over a million copies. Titles include The Expectant Father: Facts, Tips, and Advice for Dads-to-Be and The Military Father: A Hands-on-Guide for Deployed Dads. He has written on fatherhood for hundreds of newspapers and magazines and is a frequent guest on such television programs as the Today Show. He also writes a nationally syndicated newspaper column (Ask Mr. Dad), and hosts a syndicated radio show (Positive Parenting). He lives with his family in Oakland, California.