So Brave, Young, and Handsome (Paperback) 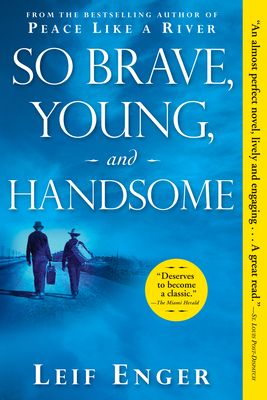 So Brave, Young, and Handsome (Paperback)

I was utterly charmed by this novel, a midwestern-western about a blocked novelist who accompanies an ex-train robber on his quest to make amends with the wife he abandoned. Along the way they encounter cowboys, sharpshooters, Pinkertons, and the greatest snapping turtle in all of literature. Why Leif Enger isn’t regularly cited as one of our best prose stylists I can’t fathom—his every page boasts sentences that astonish, illuminate, and delight. Few writers, moreover, keep your heart pounding and breaking simultaneously, but Enger makes it seem effortless.

— From Sam
Now in paperback, the new novel by Leif Enger, author of the million-copy best seller, Peace Like a River, is a lively, big-hearted redemption tale; an unforgettable, picaresque Western yarn.
In 1915 Minnesota, writer Monte Becket has lost his sense of purpose. His only success long behind him, Monte lives simply with his wife and son until he befriends outlaw Glendon Hale. Plagued by guilt over abandoning his wife two decades ago, Glendon aims to go back West on a quest for absolution. As the modern age marches swiftly forward, Monte agrees to travel into Glendon's past, leaving behind his own family for a journey that will test the depth of his loyalties and morals, and the strength of his resolve. As they flee the relentless ex-Pinkerton who's been hunting Glendon for years, Monte falls ever further from his family and the law, to be tempered by a fiery adventure from which he may never get home.
With its smooth mix of romanticism and gritty reality, So Brave, Young, and Handsome examines one ordinary man's determination as he risks everything in order to understand what it's all worth, and follows an unlikely dream in the hope it will lead him back home.

An adventure of the heart and mind.”Washington Post Book World

Enger is a formidably gifted writer. . . . At times reminiscent of the sinew and gristle in the craggier work of Annie Proulx, and at other times aspiring to a Jean Shepherdesque folk poetry.”Chicago Tribune

A fine novel . . . worthy of comparison with Shane and Monte Walsh and True Grit.”Dallas Morning News