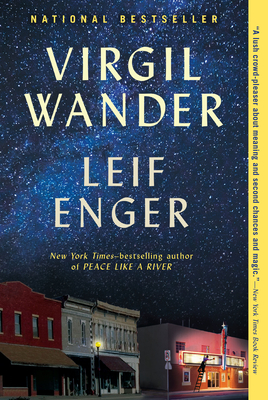 “From the fated flight of Virgil Wander’s Pontiac into the frigid waters of Lake Superior to an encounter with Rune, an enigmatic kite enthusiast searching for word of a long-lost son, and other interactions with the citizens of Greenstone, Minnesota, Leif Enger’s new novel is a most welcome, albeit quirky, story of words and people lost and found. Lovers of Peace Like a River, rejoice! Enger is back with another enchanting and enriching tale of community and revival, with his ever-deft touch of magic and grace. A perfect remedy for those whose hearts ache from our present reality, Virgil Wanderis a treasure to be shared with all readers.”
— Mark Nichols, Bank Square Books, Mystic, CT

I was utterly captivated, and impressed by this novel which lovingly and vividly captures life during a few wintery months in a small Minnesotan town on Lake Superior, just a short way up Highway 61 from Duluth. The town is populated by a host of wonderfully quirky characters who like the town have seen better, happier days, or so they think. Virgil Wander (of his name, he says “for a man named Wander, I’d spent a long time in one place”), the proprietor of the town’s movie theater, which becomes a kind of beacon for the townspeople, is the narrator of the book. As the novel begins, he is beginning a recovery from an unplanned dip in Lake Superior he took with his car, and among other things is slowly regaining his ability to find words, particularly adjectives—so as his recovery and the novel progress, his descriptions become increasingly more wondrously and beautifully evocative—just one of the many things I adore about this novel. In one fell swoop Enger is on my short list of contemporary writers I will follow anywhere he takes readers.

— From Jeanne's Picks
The first novel in ten years from award-winning, bestselling author Leif Enger, Virgil Wander is a sweeping story of new beginnings against all odds that follows the inhabitants of a hard luck town in their quest to revive its flagging heart. Carried aloft by quotidian pleasures of kite-flying, movies, fishing, baseball, necking in parked cars and falling in love, Virgil Wander is a swift, full journey into the heart and heartache of an often overlooked upper Midwest by an award-winning master storyteller.