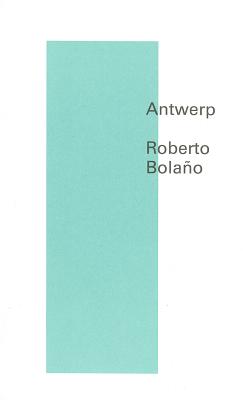 Each chapter reads like a poem; each poem, a story. Bolano transforms the commonplace into something sensational and surreal. Suddenly, the streets have more color and the people pass you by more slowly. You are the same, yet completely changed.

Written when he was only twenty-seven, Antwerp can be viewed as the Big Bang of Roberto Bolano’s fictional universe. This novel presents the genesis of Bolano’s enterprise in prose; all the elements are here, highly compressed, at the moment when his talent explodes. From this springboard—which Bolano chose to publish in 2002, twenty years after he’d written it (“and even that I can’t be certain of”)—as if testing out a high dive, he would plunge into the unexplored depths of the modern novel.

Voices speak from a dream, from a nightmare, from passersby, from an omniscient narrator, from “Roberto Bolano.” Antwerp’s fractured narration in fifty-four sections moves in multiple directions and cuts to the bone.

Author of 2666 and many other acclaimed works, Roberto Bolano (1953-2003) was born in Santiago, Chile, and later lived in Mexico, Paris, and Spain. He has been acclaimed “by far the most exciting writer to come from south of the Rio Grande in a long time” (Ilan Stavans, The Los Angeles Times),” and as “the real thing and the rarest” (Susan Sontag). Among his many prizes are the extremely prestigious Herralde de Novela Award and the Premio Rómulo Gallegos. He was widely considered to be the greatest Latin American writer of his generation. He wrote nine novels, two story collections, and five books of poetry, before dying in July 2003 at the age of 50.

Natasha Wimmer’s translation of Roberto Bolano’s 2666 won the National Book Award’s Best Novel of the Year as well as the PEN Prize.