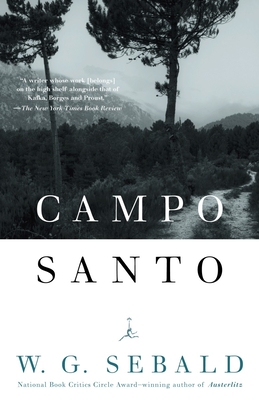 This final collection of essays by W. G. Sebald offers profound ruminations on many themes common to his work–the power of memory and personal history, the connections between images in the arts and life, the presence of ghosts in places and artifacts. Some of these pieces pay tribute to the Mediterranean island of Corsica, weaving elegiacally between past and present, examining, among other things, the island’s formative effect on its most famous citizen, Napoleon. In others, Sebald examines how the works of Günter Grass and Heinrich Böll reveal “the grave and lasting deformities in the emotional lives” of postwar Germans; how Kafka echoes Sebald’s own interest in spirit presences among mortal beings; and how literature can be an attempt at restitution for the injustices of the real world.
Dazzling in its erudition, accessible in its deep emotion, Campo Santo confirms Sebald’s status as one of the great modern writers who divined and expressed the invisible connections that determine our lives.

W. G. SEBALD was born in Wertach im Allgäu, Germany, in 1944. He studied German language and literature in Freiburg, Switzerland, and Manchester. He taught at the University of East Anglia in Norwich, England, for thirty years, becoming professor of European literature in 1987, and from 1989 to 1994 was the first director of the British Centre for Literary Translation. His novels–The Rings of Saturn, The Emigrants, Vertigo, and Austerlitz–have won a number of international awards, including the National Book Critics Circle Award, the Los Angeles Times Book Award, the Berlin Literature Prize, and the Literatur Nord Prize. He died in December 2001. His posthumous publications include On the Natural History of Destruction and After Nature.

Translator ANTHEA BELL won the Helen and Kurt Wolff Prize for her translation of Austerlitz. She lives in Cambridge, England.

“A writer whose work [belongs] on the high shelf alongside that of Kafka, Borges and Proust.”
–The New York Times Book Review

“Far outdoing even the best of these pieces are three set in Corsica. Perhaps intended as part of a new work of imagination, they compel a startled delight, and they compel painful regret–outrage even–that Sebald is gone and unable to continue.”
–Los Angeles Times Book Review