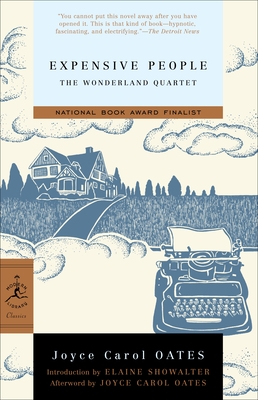 This is book number 2 in the The Wonderland Quartet series.

Joyce Carol Oates’s Wonderland Quartet comprises four remarkable novels that explore social class in America and the inner lives of young Americans. In Expensive People, Oates takes a provocative and suspenseful look at the roiling secrets of America’s affluent suburbs. Set in the late 1960s, this first-person confession is narrated by Richard Everett, a precocious and obese boy who sees himself as a minor character in the alarming drama unfolding around him.

Fascinated by yet alienated from his attractive, self-absorbed parents and the privileged world they inhabit, Richard incisively analyzes his own mismanaged childhood, his pretentious private schooling, his “successful-executive” father, and his elusive mother. In an act of defiance and desperation, eleven-year-old Richard strikes out in a way that presages the violence of ever-younger Americans in the turbulent decades to come.

A National Book Award finalist, Expensive People is a stunning combination of social satire and gothic horror. “You cannot put this novel away after you have opened it,” said The Detroit News. “This is that kind of book–hypnotic, fascinating, and electrifying.”

Expensive People is the second novel in the Wonderland Quartet. The books that complete this acclaimed series, A Garden of Earthly Delights, them, and Wonderland, are also available from the Modern Library.
Joyce Carol Oates is the Roger S. Berlind Professor in the Humanities at Princeton University. The bestselling author of the novels We Were the Mulvaneys and Blonde, she has written numerous works of fiction as well as poetry, essays, criticism, and plays.
Praise for The Wonderland Quartet, four early novels by Joyce Carol Oates

A Garden of Earthly Delights
Expensive People
them
Wonderland

"Protean and prodigious are surely the words that describe Ms. Oates. From the very beginning, as these impressive and diverse novels make clear, her talents and interests and strengths have never found comfort in fashionable restraint. She's sought, instead, to do it all -- to face and brilliantly, inventively transact and give shape to as much of experience as possible, as if by no other means is a useful and persuasive gesture of moral imagination even conceivable. For us readers these are valuable books." --Richard Ford

"These four novels reveal Oates' powers of observation and invention, her meticulous social documentation joined to her genius for forging unforgettable myths. She is one of the handful of great American novelists of the last hundred years. " --Edmund White

"This rich, kaleidoscopic suite of novels displays the young Joyce Carol Oates exercising her formidable artistic powers to portray a turbulent twentieth-century America. They offer the reader a singular opportunity to experience some of Oates's best writing and to witness her development, novel by novel, into one of our finest contemporary writers." --Greg Johnson, author of Invisible Writer: A Biography of Joyce Carol Oates

"As a young writer, Joyce Carol Oates published four remarkable novels, A Garden of Earthly Delights (1967), Expensive People (1968), them (1969), and Wonderland (1971). They were all nominated for the National Book Award, and Oates won the award for them in 1970....Reprinting the series in modern paperback editions nearly forty years after their composition allows us a new perspective on their collective meaning and illuminates their place in Oates's overall career...The Wonderland Quartet, written in the "white heat" of youthful imagination and fervor, remains not only relevant but prophetic about the widening social and economic gulf in American society, the self-destructive violence of political extremism, and the terrifying hubris of science and technology. Bringing to life an unforgettable range of men and women, the Wonderland Quartet offers a compelling introduction to a protean and prodigious contemporary artist." -- Elaine Showalter, from her introduction, which appears in all four of these new Modern Library editions