Lying in the River's Dark Bed: The Confluence of the Deadman and the Mad Angler (Made in Michigan Writers) (Paperback) 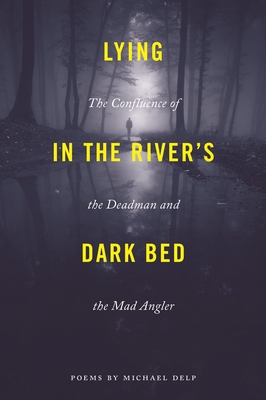 Lying in the River's Dark Bed: The Confluence of the Deadman and the Mad Angler (Made in Michigan Writers) (Paperback)

Lying in the River's Dark Bed: The Confluence of the Deadman and the Mad Angler by Michael Delp is a collection of fifty-six poems that brings together two characters Delp has been perfecting for years: Deadman and the Mad Angler. The Deadman, a spirit that constantly shifts, is one part troublemaker, one part truth-teller, and one part demon who demands respect. The Mad Angler, on the other hand, could be called the Mad Shaman or Mad Activist, as he speaks of the water and nature and then of the greed of man. While these two personas are distinct in the collection (highlighted beautifully in the unique double-sided book design) they also come together at times in perfect harmony.

The Deadman and the Mad Angler are walking contradictions-twin sons of different mothers. The Deadman is a trickster figure, a hive of contradictions. He can be killed but cannot die. He is supremely intelligent, yet is as dumb as a stone. He is an enigma to himself and to all others, yet he understands the origins and the meanings of the inner lives of all things. He is impossible to understand, yet somehow through his musings enlightenment occurs. His poems inspire contentedness, even though they might frighten you first in order to do so. The Mad Angler is more finely tuned, focused primarily on the environment. He exercises more restraint and resistance than his scattered brother, focusing on nature and on what is flowing in the water around him and inside of him. His voice is sure and firm on all things water related because he is as much river as person. The collection embraces these voices as separate and unique identities, while highlighting a center section called "Confluence," the place where these two come together to meditate on some of the most profound emotions evoked by the contemporary world.

Lying in the River's Dark Bed reflects the compatibilities and contradictions of the natural world. These ritualized poems are both funny and thought provoking and an example of persona writing at its best. Those interested in conversational poetry and environmental writing will be enthralled with this stirring yet soothing collection.

Michael Delp recently retired from the Interlochen Arts Academy, where he was the director of creative writing for many years. He is the author of numerous collections of prose and poetry, with his most recent collection of short stories being As If We Were Prey (Wayne State University Press, 2010). He is also the mentor and advisor to the Front Street Writers Program in Traverse City, which operates under the auspices of the National Writers Series. He lives in Interlochen with his wife, Claudia, and splits his time between there and Reeling Waters, his cabin on the Boardman River.